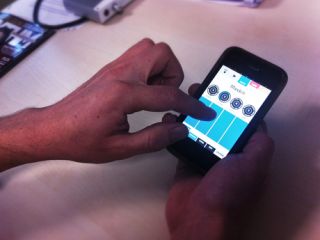 We first saw Figure, the new 69p iPhone app from Propellerhead Software, when it was unveiled at Frankfurt Musikmesse 2012 a fortnight ago.

At the time we, like a lot of people it seems, were half expecting Propellerhead's Messe announcement to be a version of Reason for the iPad - to rival Apple's GarageBand for iOS. Well, we were wrong - but while Figure doesn't come close to packing the features of a full DAW, it is powered by Reason.

Each is played by tapping or scrolling a finger across a 'performance box'. The drum machine has four of these boxes (kick, snare, hats and a perc sound), while each synth has one larger box where notes can be played within pre-selected scales, with an adjustable range.

Moving between different areas on the X/Y axis of the performance boxes changes different parameters depending on which preset is being played. Holding down on the box triggers set, pre-sequenced rhythmical patterns, which you can changed by scrolling through the Rhythm Wheel just above the performance pads.

Flicking to the Tweaking tab along the bottom of the screen gives access to another performance box, which is used to tweak two pre-defined parameters of each preset.

Your track's tempo, key and scale can be changed in the Song tab, and shuffle can be adjusted. Finally, in the Mix tab, each instrument can be muted and levels can be adjusted. Sidechain compression can also be added with the Pump control, powered by Reason's much-lauded master compressor.

Everything can be recorded and automated across a two-bar loop, while parts can easily be erased and rerecorded by holding down the pads with the Erase Mode engaged.

Next: hear Figure in action

Listen to our demo below to hear us build a simple house loop from scratch with Figure. We record a drum loop, add shuffle, introduce lead and bass lines, then start tweaking.

The first thing to note is that Figure has an exceptionally well-designed, easy-to-use interface.

We had a love-hate relationship with ReBirth iOS, Propellerhead's last venture into the app world. On the one hand, having all the features of the developer's Roland-emulating '90s classic at our fingertips was a huge retro treat.

On the other, ReBirth's interface was literally just the original version resized to fit the iPhone screen - resulting in less-than crystal clear graphics and lots of infuriatingly fiddly finger work. No such issues with Figure; it has been designed form the ground up for iPhone.

It's no secret that we're big fans of Reason here at MusicRadar. Sound and features aside we think it looks great and is very user-friendly - and both of these traits have been passed down to Figure.

Sound-wise, Figure's instruments are as good as you'd expect them to be, bearing in mind the bigger-siblings powering them.

There are 13 drum kits and both the bass and lead synths pack over 30 presets each. All are fairly obviously named (no prizes for guessing what TR-BOB sounds like), and there's a decent range of sounds available.

While the Tweak tab offers only limited editing of each sound, the editable parameters have been well selected to suit the style of each preset. The Pump compression is a welcome addition too.

And it's here that we hit a slight wall with Figure; we wish we could do more with it!

It's not possible to either save or export loops. The only way to get your work out of the app and into your DAW is to connect your iOS device to an audio interface via the headphone jack.

Looking at the way Propellerhead is marketing the app, it's clear that Figure is meant more as a fun toy than a serious music making application. On that level the app works beautifully; it's exceptionally simple to use, and you'll be making music in seconds.

But because it sounds great, and packs a surprising amount of power, we'd love to be able to go past the app's two-bar limitation and go a little deeper.

We'd love to see Propellerhead bring out an expanded version of the app in the future. If it were possible to export loops out of the app and into each instrument's bigger siblings in Reason for deeper editing, Figure could go beyond being fun and become the ultimate sketch-pad for Reason users.

Still, as it stands, at 69p there's no excuse not to download this brilliantly fun, and surprisingly powerful app.

Listen to some more audio demos we made with Figure: