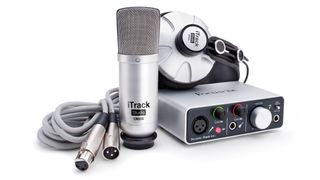 iTrack Studio is a bundle for would-be iPad sound recordists, featuring a microphone, headphones and an interface - the iTrack Solo. As well as being iPad-ready, the interface also connects to Mac and PC.

The iTrack Solo interface scored 4.5 out of 5 in our review two years ago.