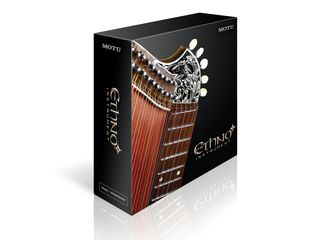 MOTU Ethno Instrument 2 is double the size of its predecessor.

The Version 2 upgrade more than doubles the size of Ethno's included sound library of instruments, loops and phrases. Significant new features have also been added, including preset searching, microtonal scales, state-of-the-art time stretching, and much more.

"Ethno Instrument Version 2 delivers the most comprehensive world/ ethnic sound library ever offered in a single package," said Jim Cooper, MOTU Director of Marketing. "In addition, Ethno 2 represents the most advanced virtual instrument interface for ethnic sounds, with unparalleled features such as in-depth support for microtonal scales and tuning."

To help users quickly find sounds in this massive 21 GB library, Ethno 2 lets users browse presets by geographic region or instrument category, or by a new search feature: users type in an instrument name or other text phrase and all presets with that text in their name instantly appear in the browser list. Users then simply click to audition sounds, without having to close the browser, for fast previewing and loading of sounds into separate parts. Version 2 now supports unlimited parts, so users can quickly build ensembles of instrument sounds, loops and phrases, with no limits on the size of the ensemble.

Ethno 2 gives users access to the rich and exotic world of non- western tuning and scales. Users can browse dozens of microtuning presets from all over the world, organized by world region or by scale type, and then play authentic non-western tempered scales of any size (from five tones to 24 tones) via any standard MIDI controller. The supplied microtonal presets were developed by a world expert in micro-tuning and conform to the Scala open file standard

(.scl) for microtuning. Users can visit the scala web site, http:// www.huygens-fokker.org/scala/, browse thousands of microtuning files, download them for free, and simply drag and drop them into Ethno 2 to add them as user presets. Scales can be freely applied to any instrument presets, allowing users to mix and match microtuning scales with sounds from anywhere around the globe. For example, a microtuning scale from Thailand could be applied to a Celtic harp sound from Ireland.

Since its first release, Ethno has been recognized for its extensive tempo-matching features. Loops always play in time with each other and the host application, when running as a plug-in. Version 2 extends these time-stretching capabilities with enhanced, state-of- the-art audio processing technology licensed from the famed IRCAM institute for advanced research in Paris. Users can speed up, slow down, or match tempos of loops and phrases with unprecedented audio quality, even with extreme changes in speed, either faster or slower.

Other Version 2 feature highlights include:

Ethno Instrument Version 2 will ship in Q1 of 2010. Price is $395. An upgrade path will be offered for Ethno Version 1 users.