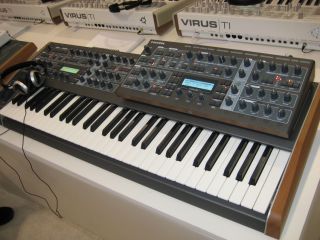 Having burned so brightly for four days, the 2009 Winter NAMM show has now faded into history.

For those of you suffering withdrawal symptoms - or those who simply can't be bothered to trawl through the huge amount of news we've posted on MusicRadar's NAMM 2009 blog - here are the hi-tech hardware highlights.

1. Akai APC40
Various companies have been trying to produce The Perfect Live Controller for a while now, but Akai's effort is the first (though probably not the last) to feature Ableton branding. Offering bidirectional communication with the company's kick-ass DAW, this fine-looking device comes pre-mapped to work with the software. Check out Computer Music's hands-on test and see the APC40 in action in an official Ableton video.

2. Native Instruments Maschine
Last year, the rumour was that NI was working on a dedicated controller for its Battery software, but what it's actually done is re-invented the groovebox for the 21st century. The hardware is simply a controller (there's no audio or DSP onboard), but combined with the supplied software and a laptop it becomes a fast and fun groove-based sequencer and sampler. Read Future Music's first look and check out the Maschine in video.

3. Roland AX-Synth
Guess what? Roland has only gone and brought back the ruddy keytar! This much-derided instrument seems set for a renaissance in 2009, and the AX-Synth will be the model that every self-respecting electro fashionista wants to wear. Featuring its own sound set (256 tones are accessible from eight bank buttons) and a 49-note keyboard, the device can also be used as a MIDI controller. Future Music has already given it the once over.

4. Access Virus TI2
The Virus remains the hardware synth that even plug-in lovers want to own, and this update to the TI version looks like a winner. It ups the power by 25%, has a redesigned interface and looks so good that you'd want it in your studio even if you never planned to play it (keyboard and desktop versions are available). Again, Future Music has the scoop.

5. Universal Audio UAD2 Solo/Laptop
The question isn't who would want to have the power of Universal's UAD2 powered plug-in system in their laptop - it's who wouldn't? Shipping with a selection of studio staples (including UA's 1176SE Compressor/Limiter, Pultec EQP-1A Equalizer, RealVerb Pro Room Modeler, and CS-1 Channel Strip) and offering compatibility with the entire UAD2 plug-in library, this new ExpressCard is bound to be a hit.

6. IK Multimedia StealthPedal
IK's collaboration with Fender may have (deservedly) grabbed all the headlines, but this little sucker looks pretty handy to us, too. Essentially, it's an audio interface and pedal controller in one, with AmpliTube 2 Live taking care of software tone generation duties. Having seen it, MusicRadar's Chris Wickett reckons it's built to last, so expect to see it appearing at gigs everywhere soon.

7. M-Audio Axiom Pro
You can usually bank on M-Audio to launch at least one new MIDI controller keyboard at NAMM - this year, it gave us a range of three. The Axiom Pro series looks pretty tidy, too (there are 25-, 49- and 61-note versions), with highlights including a new auto-mapping system and a graphical LCD. These controllers might just give Novation's ReMOTE SL models something to think about.

8. Roland V-Piano
We're not convinced that the V-Piano will shake up the keyboard market in the same way that Roland's V-Drums set a cat among the percussive pigeons, but it looks good, it sounds good, and if you like your instruments bulky, you're going to love it. Find out what Future Music thought when it was treated to a preview.

9. Customised Korg nanoSeries
They were launched in white; then they were available in white; and now we have the customised versions of the Korg nanoSeries to deal with. Operationally, they're just the same as the standard models, but as you can see, they've got jazzed-up paint jobs. We'll find out more about who's making these and how much they cost and report back soon.

10. Alesis JamDock
OK, it's not exactly groundbreaking, but we like the look and concept of the JamDock. As you can see, your iPod can be cradled in the dock, and there are also a couple of 1/4-inch inputs so that you can connect your instrument(s) of choice. Plug in a pair of headphones or take the audio outputs to your amp/speakers and you can then play along with your favourite music.

Have we missed anything? Let us know in the Comments section below…