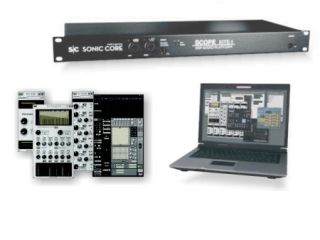 The Xite-1 comes with hardware and software and runs on laptop and desktop machines.

Some of you will remember Creamware, which achieved some success with its Pulsar and Scope DSP systems several years ago. In 2007, the company´s technology was acquired by Sonic Core, and it´s now revealed the first new product to be based on it.

Set to be unveiled at Musikmesse 2008, the Scope Xite-1 promises to deliver ten times more DSP than the previous Scope system and comes in a 1U rackmountable case. Connection to your computer is over a PCI-Express or ExpressCard interface, so it can be used with both desktop and laptop machines.

The hardware also functions as an audio interface; it has mic and instrument inputs, 16 channels of ADAT I/O, Wordclock I/O and an AES/EBU interface. MIDI In/Out/Thru parts are included too.

As well as the Scope Xite-1, Sonic Core is also launching the fifth version of the Scope software. This gives you access to digital mixers, more than 50 audio effects, samplers and synths. The new system is compatible with previous Scope products, so users will be able to run a number of third-party plug-ins.

And remember: all of these processors run on the Xite-1´s DSP, leaving your computer to take care of other music making tasks.

Scheduled to ship in May 2008, the Scope Xite-1 will cost around €2698 and run on Mac and PC. Further details are available on the Sonic Core website.