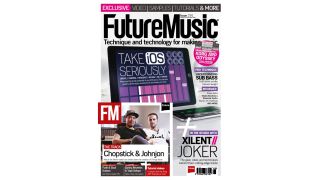 Possibly more so than any other area of music technology, iOS music making is moving forward at an alarmingly fast pace. Even since FM last tackled the subject back in 2013, things have come on in leaps and bounds, both in terms of the power of the hardware and the quality of apps available.

While, undoubtedly, there was a time when the idea of making music using an iPhone or iPad was little more than a novelty, those little devices are now capable of numerous studio applications - from creating sounds to sequencing synths, controlling your DAW and beyond. In this month's cover feature, we'll run through the ways you can incorporate an iOS device into your workflow, and show you all the apps and accessories you need to know about.

Take iOS Seriously - All the techniques, apps and accessories you need to know to make the most of your device in the studio

Understanding Sub Bass - How to get the biggest, baddest subs around

Producer's Guide To... Korg ARP Odyssey - We go in deep with the long awaited ARP reissue, showing you how to create classic sounds, synth drums and more

Xilent - With a formidable list of remix credits already under his belt, Eryk Kowalczyk, aka Xilent, is now releasing his debut album, We Are Virtual. We catch up with Eryk in his Warsaw studio

Joker - Joker gives us the lowdown on the making of new album, The Mainframe

The Track: Chopstick & Johnjon - The Berlin-based duo break down Pining Moon from their debut LP

Robot Machine - The machines have risen and they're coming for your studio. Add some robotic funk today!