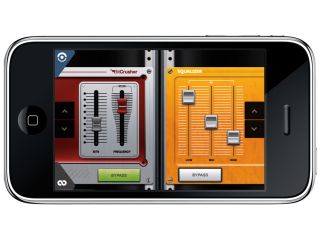 Intua BeatMaker is one of the best handheld apps available.

MusicRadar's round-up of the most popular pocket-sized music-making devices comes to a conclusion with a look at Apple's iPhone/iPod touch platform. Both products are much-desired, but do they offer anything for creative types?

Before you decide which handheld system is right for you, make sure read our guides to Sony's PSP and Nintendo's DS, too.

You know the general strengths of Apple's multi-touch mobiles by now. Their roots in desktop Mac OS X make them very suitable for music production, as they boast some of the functionality of the Mac's Core Audio and MIDI tools. Just weeks after the launch of the official development platform, they've attracted a strong selection of music apps for sale or free download via Apple's iTunes-based App Store.

While the iPod Touch and iPhone come closer to the full Mac experience than any portable device in the past, they have limitations. For instance, the lack of multi-tasking means an incoming phone call can interrupt music-making, and the hardware lacks a floating-point chip that would make DSP tasks easier. Some developers have been frustrated with limitations on development and distribution of the official SDK, too - a few have turned to hacked firmware as an unofficial solution to this issue.

'Jailbroken' music apps were available for months before the official apps were released. Some developers even used hacked iPhones as a testing ground, then moved to the official platform. Most developers are likely to take the official route, which is far more practical than the equivalent on a mobile gaming system. Nonetheless, you should expect a handful of less 'mainstream' music production tools to remain underground.

Intua BeatMaker: Currently your best bet for producing entire tracks on Apple's units, BeatMaker makes full use of the devices' touch-centric interface. Tapping your fingers navigates 16 MPC-style pads for triggering, sounds, a sample editor, step and song sequencer, and even a live performance setup. There are also two effects channels with internal effects and live pattern recording. The tool doesn't yet have wireless MIDI capabilities, and there are no internal synths, but Intua is putting the focus on pre-built samples and drum kits. A desktop client helps sync your own content to and from the device. All of this is wrapped in one of the best interfaces yet to grace a mobile music tool.
Price: £11.99

akaRemote.app, i3L, MRMR: These tools have one thing in common: they're designed to turn the iPhone or iPod Touch into a custom controller for music and visual apps. akaRemote is a bi-directional system that interfaces Apple's devices with Max/MSP, using OpenSoundControl. i3L, based on the same tool, can use MIDI for compatibility with everything from Ableton Live to i3L's developers' own 3L visual tool. mrmr is Mac-only but open-source, enabling you to create your own editable control templates for use with any music or visual software you care to name.
Price: Free

iPhone Synth: This is a disarmingly simple homebrew program, notable for its ability to change synth parameters on each step sequencer step, and use the onboard accelerometers as modulation sources.
Price: Free

MooCowMusic Band: The most toy-like of the options here, Band is a set of tappable instruments - including drums, a keyboard and guitar frets - with a metronome and recording capabilities.
Price: £3.49