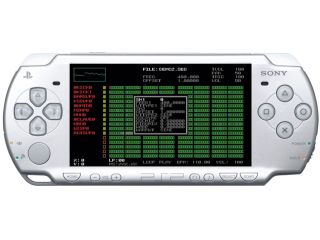 The PSP is more than just a gaming machine.

These days, music isn't just being made on desktop and laptop computers - you can now produce a complete song using a device that sits in the palm of your hand.

So, we thought it high time that we assessed the relative merits of the three most popular portable platforms on the market: Nintendo's DS, Apple's iPhone/iPod touch and, to begin with, Sony's PSP.

The PSP is the most powerful mobile gaming platform available today, packing a fast CPU that's ideal for music-making. An onboard FPU (floating point unit) - which even the iPhone/iPod Touch lack - makes it a great platform for real-time synthesis. It has two free killer apps (we'll get to these) that could convince you to buy it on their own. The console also has a big, bright screen, and it's been made all the more attractive by a new, lower price.

The PSP hasn't attracted the variety of developers or 'homebrewers' that the DS and iPhone have, though what the PSP scene lacks in quantity, it makes up for in quality. Also, if you want a device with touch-sensitive input, you'll obviously have to look elsewhere.

Unlike the DS, you don't need special hardware to run homebrew apps on your PSP, though you may have to use a specific firmware designed for homebrew compatibility. Sony are no fans of these updates, considering them illegal and (because they can be abused by pirates) a threat to their business. That hasn't slowed down the speedy availability of hacked versions of each new firmware build, however.

PSPSEQ
Perhaps the most well-rounded of all the current music apps for game systems, PSPSeq combines a full-featured step sequencer and arranger with real-time synthesis, sample playback, and effects. The synth options are arguably the most advanced of any mobile platform, which is unsurprising given developer Ethan Bordeaux's day job as a DSP programmer.

PSPSeq features not only virtual analogue-style synthesis but also FM, physical modelling and a digital oscillator that Ethan calls 'rotational synthesis'. PSPSeq doesn't have the wireless connectivity options or MIDI export that some of the DS tools benefit from, but its real strength is its unique synthesised sounds, and it's fully capable of producing entire tracks without any other tools.
Price: Free

PSP Rhythm
This also takes full advantage of the console's processing power, with a high-quality resampling engine, timestretching options and a range of tasty real-time effects. You can also bang out rhythm and melodic patterns via a hardware-style step sequencer interface or, alternatively, enter multitrack sequencer mode for arranging whole songs. Then, when you're done, you can export your project directly to audio, making this a really great tool for assembling loops away from your computer for dropping into FL Studio, Ableton Live (or any other app) when you're back in the studio.
Price: Free