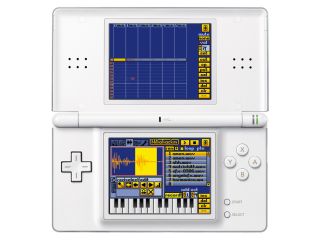 Welcome to the second part of MusicRadar's guide to making music with a handheld device.

Previously, we assessed the merits (and shortcomings) of Sony's PSP as a portable tune-crafting platform - now it's time to put Nintendo's hugely popular DS under the microscope. Elswhere, you can find out what we make of Apple's iPhone/iPod touch platform.

The DS has the advantages of stylus input, dual displays and a long tradition of homebrew development on Nintendo platforms. That has made it fertile ground for oddball music-making apps of the sort you often can't find on desktop computers, let alone mobile devices. A range of emulators and its GBA cartridge slot make the console backwards-compatible with classic tools like Nanoloop and LSDJ. The DS is also a bargain, and has a rabid community of musicians behind it to help you out.

The device's internal architecture isn't as powerful as that of the PSP, or as easy to develop for as the iPhone. Most importantly, hacking can be a pain - and Nintendo, like Sony, wants the practice halted altogether.

Running homebrew software requires specialised 'backup' or flash-loader hardware, which can involve some complex compatibility issues. At the very least, you'll want to do your homework before ordering an add-on. The payoff is custom firmware with other capabilities, like multimedia management software and the option to back up your games.

In July, Nintendo joined with various software developers to sue five Japanese makers and distributors of popular flash-loaders. These lawsuits are unlikely to eliminate the devices' availability, however - good news for people who use them as tools to make their own software, rather than steal someone else's.

NitroTracker: This is a DS-compatible, more contemporary take on the legacy of tracker tools like LSDJ. NitroTracker can create elaborate, complex sequences of patterns, complete with loops and drawable volume envelopes. As with the PSP apps, it can also export audio, so you can use NitroTracker as a portable loop factory for export to other platforms. It also has Wi-Fi MIDI support, so you can use it as a mobile sound-maker and a wireless MIDI sequencer for your computer rig as well. There's support for internal sounds, sample looping (with a built-in editor), and even live recording via the mic.
Price: Free

DSMI - DSMIDIWIFI, DSERIAL: 0xtob, creator of NitroTracker, collaborated with TheRain on a suite of useful utilities for using the DS with MIDI. You can transmit and receive MIDI messages via Wi-Fi or - using the DIY DSerial hardware - MIDI cables, meaning that it's also possible to connect your console to another DS, MIDI hardware or a computer.

DSMI, or the DS Music Interface, also includes a set of tools that can turn your console into a touch-screen synthesiser (using those signature internal Nintendo sounds) a KAOSS Pad-style X/Y touchpad for your stylus, or a music keyboard you can tap.
Price: Free

glitchDS: Cellular automation is a type of simple mathematical model that simulates basic biological evolution, as used in John Conway's famous Game of Life. Add glitchy synth sounds and you get the musical creation program glitchDS - a sequencer and synth based on the CA model. Reaktor fans may be aware of the ensemble Newschool, which does something similar. Or, to put it another way, this is a step sequencer that doesn't work in the conventional manner. Grab a stylus and explore its decidedly unorthodox interface, complete with snapshot saving and a set of pads for basic sound triggering. While checking this one out, you should also take a look at repeaterDS, a simple but fun program that controls looped sample playback with the stylus.
Price: Free

DSCRATCH: It's unlikely to be mistaken for a vinyl record, but this app enables you to digitally loop, stretch and scratch audio samples with the stylus, producing wonderfully glitchy sonic results.
Price: Free

Korg DS-10: This isn't a homebrew music app - it's actually a collaboration between a game development house (AQ Interactive) and Korg. As a result, it's one of the friendliest programs out there - though that hasn't lessened its appeal to the DS music crowd.

Inspired by the classic Korg MS-10 synth, it comprises a suite of tools, including two dual-oscillator virtual analogue synths, a four-part drum machine loaded with samples, a step sequencer, and basic effects. It looks the most like a 'regular' soft synth of all the DS offerings, but with the advantages of portability, stylus control, and even wireless collaboration options if you can convince a mate to buy one, too. Because it's an official, authorised DS app, it doesn't require any special hardware.
Price: £25

How to get started

If you want to install some homebrew music programs on your DS, you'll need a specialised piece of hardware called a flash cartridge, which enables you to load unofficial, free software that doesn't ship on approved cartridges. Nintendo has frowned upon such products because they're often abused to pirate games - even though musicians have more benign uses for them. Check the documentation for the app you want to run for compatibility, and check out sites such as Dev-Scene.com.