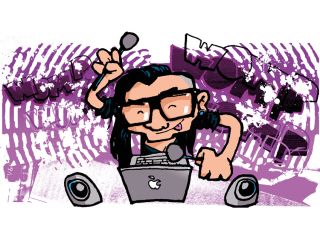 We're not sure this is such a good idea.

It's no secret that laptops have made it possible to take your computer music studio pretty much anywhere, and as they have grown in popularity, so the number of diminutive peripherals on the market has increased, too.

We've had pint-sized MIDI keyboards and other controllers, mixers that weigh less than a paperback, and audio interfaces so small that they can dangle off the end of a USB lead.

Compact as these products are, however, once you've added them to your setup, your laptop suddenly loses some of its portability. You might be able to whip out a MacBook on a plane, but as soon as you start trying to plug anything into it - even a mouse - you've got problems.

What's more, we're now getting used to the iPad and its self-contained touch-based method of music making. This is massively appealing, but - as we all know - most apps have their limits, and Apple's tablet in itself still isn't an option when you want to work on more serious projects.

We think it's worth asking, then, if it's possible to dispense with the additional hardware, and - as with the iPad - 'play' your laptop as if it were an instrument, using its built-in input devices as creative controllers.

In order to do this, we're going to have to look at all the possible control options that the typical laptop comes with as standard. And where better to start than with the good old QWERTY keyboard?

This might not seem like the most creative of platforms, but bear in mind that the vast majority of DAWs now enable you to use these keys to play MIDI notes. Typically, you'll be able to call up an on-screen musical keyboard that will respond to either QWERTY or mouse control.

As we're not going to be requiring the services of our little rodent friend, let's consider how viable the option of using your alphabetical keys to play notes really is. You won't be able to play super-fast riffs and chord progressions, but if you want to fiddle around with musical ideas while you're on the move, you should be able to get by.

Playing your QWERTY keyboard is an option, then, but it's possible that you could go a stage further and actually reconfigure it to operate as a creative control surface. We've seen plenty of DAW-specific keyboard overlays in the past (these are typically designed to detail keyboard shortcuts), but Logic Café's MacBook-compatible ControlSkin redefines your QWERTY keyboard. Its aim? To turn the traditional computer keyboard into a more creative platform that can be played in a manner comparable to NI's Maschine and Akai's MPC hardware products.

You need to install a patch file to make it work, but once you've done this, ControlSkin promises to make on-the-fly, QWERTY-based beatmaking a reality.

The other central control component of most laptops is the trackpad, and this too has music making potential. If you're a Mac user, LSD Programming's Track Master (available for £2.99 on the Mac App Store) is the software that helps you to realise this.

Track Master gives you both Notes and X/Y modes to work with. These are pretty self-explanatory, with the former enabling you to input musical notes (you can play with up to 11 fingers at a time, theoretically…) and the latter adding X/Y pad functionality.

If you're a PC user, try Livelab's free Touchpad 2 MIDI, which not only allows you to configure an X/Y pad, but also lets you turn your trackpad into a panel of buttons and sliders.

As a side note, it's worth mentioning that when our sister magazine Future Music interviewed Skrillex recently, he told them that the reason he can edit so fast (and if you listen to his music, you'll realise that he makes a lot of edits) is that he uses the trackpad rather than the mouse. We're not convinced that his methods will be faster for everyone, but it demonstrates that restricting yourself to your laptop's control inputs doesn't have to compromise your workflow.

Where else, then, can we look for creative inspiration? 'Look' might be the operative word here, for there have been various attempts to harness the power of your laptop's webcam for MIDI control purposes. To be fair, a lot of these seem more like experimental works-in-progress than they do finished articles; but if you want to experiment with this kind of technology, open source projects such as Peripheral MIDI Controller and Webcam MIDI can help you to do it.

That about covers the possible control options on your laptop that you can see, but there may actually be one that you can't. Released last year, SmackTop is a clever little free utility for post-2005 MacBooks (excluding MacBook Airs) that can translate data from your computer's accelerometer into MIDI messages.

In fact, it can send data in up to four directions, which in practical terms means that you can physically hit your laptop in up to four different places to trigger a quartet of different drum (or other) sounds.

Don't believe us? Check out this demo video. You might look slightly barmy if you start belting your MacBook on a train, but you could also say that this is laptop-only music-making at its most visceral.

On a similar theme, but with a different kind of implementation, there's the Pulse Controller ($64). Again, the idea is that you can use finger strikes to trigger sounds; but here, a piezoelectric microphone is plugged into your laptop and positioned on a flat surface so that your taps can be translated into MIDI data (a piece of software helps with this). The sticklers among you can argue that the need for a separate mic breaks our 'no hardware' rule, but we'll let you decide how big an issue this is.

Although none of these solutions is likely to have you dispensing with your MIDI controllers for good, what we can say is that having just your laptop to hand doesn't necessarily mean that the only work you can do on your music projects is of the point-and-click variety (particularly if you own a MacBook, it would seem).

However, it's not possible to achieve iPad-style levels of tactility without a touchscreen laptop - and that opens up a whole other debate about whether, given its form factor, this is actually desirable. However, there are options available, and they might even take you down different creative avenues than you'd find with your traditional setup.

This article originally appeared in issue 180 of Computer Music magazine.