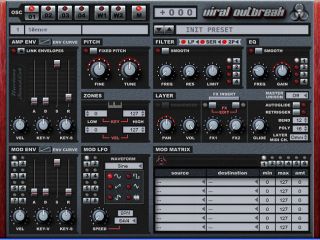 Even the interface is inspired by the Virus TI.

While software synths are now the dominant force in high-tech music, certain hardware models still have the power to make even seasoned producers drool. One of these is the Access Virus TI - the Snow version of which was recently released - and it´s this instrument that´s inspired the creation of Nucleus SoundLab´s Viral Outbreak.

The software is said to be based on the Virus TI, which suggests that it features sounds that are sampled from it. Classic wavetables, saw and pulse waveforms , pads, formant effects, supersaws and synth drum kits are all included.

Viral Outbreak is available in two formats: Windows VST plug-in and Reason ReFill (version 4 of the software is required). The former comes with a 3.5GB soundbank and more than 950 presets, while the ReFill features 2GB of compressed sample data and 235 Combinator patches.

It´s also worth noting that, because it´s based on the WusikEngine, the plug-in version can load any Wusikstation libraries.

Viral Outbreak is available now as a download priced at $99.95. If you want to try before you buy, demo versions of the plug-in and ReFill are available, as are a number of audio examples.

The Nucleus SoundLab website is the place to go for all your Viral Outbreak enquiries.