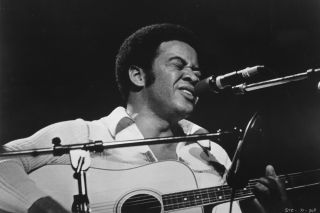 With news breaking of Bill Wither’s sad passing, we’re taking a moment to consider just how far his music reached. Since the 90s, Bill’s songs have laid the foundation for hundreds of songs after being sampled and covered by many-a-legend.

Whether it’s the acoustic sparsity and delicate groove of Ain’t No Sunshine, or the heavy funk of songs such as Use Me, here are some of the biggest songs that use Bill Withers samples, and wouldn’t be anywhere near the same without them.

Throw on No Diggity in a crowded room and you’ll be hard-pushed to fail in making people dance. But the 1996 hit from Blackstreet could have ended up in multiple different hands had things gone slightly different.

Dr Dre constructed the beat from a sample of Bill Withers’ Grandma’s Hands, and was planning his exit from Death Row Records when he teamed up with the king of New Jack Swing, Teddy Riley to produce Blackstreet. To swoop under the radar, Dre’s contribution outside of his credited verse was kept low-key, with Riley being credited as producer.

Legend has it that Suge Knight originally offered the beat to 2Pac, to be featured on All Eyez On Me, his first album for Death Row, but Dr Dre had already sold the beat to Riley, who in-turn had offered it to r’n’b group, Guy. The sessions failed to produce, and even a final offer to Guy’s lead singer, Aaron Hall was declined, keeping it destined for Blackstreet. The acoustic guitar sample is taken from the start of the song, with the hummed vocal featuring throughout the song. Bill Withers gave us many gifts, but as well as the music, he should be applauded for providing the basis of the song that knocked Macarena off its 14-week chart top spot.

Kendrick Lamar: Sing About Me, I’m Dying of Thirst

James Gadson’s unbelievable kick, hat and crosstick groove from Withers’ funky masterpiece, Use Me has laid the foundation for a lot of hip-hop tracks. UGK (Underground Kings) used the drums, bolstered by samples and the song’s unison riff, as well as the title for Use Me Up in 1992. Nas and Kanye West teamed-up to create Still Dreaming using the beat, and Logic looked to Use Me twice in 2014 on Under Pressure and Metropolis. But, Bill Withers clearly runs strong in the Dr Dre family line, as Kendrick Lamar put the groove to its best use on Sing About Me, I’m Dying of Thirst from 2012’s good kid, m.A.A.d city.

The beat is quintessential Gadson: single-handed sixteenths played delicately on the hi-hats (complete with barked accents), a punchy, dead bass drum and a crosstick so thick and fat sounding, you’d swear it was a sample. That is, if James Gadson wasn’t the guy who gets sampled, rather than using them.

Dr Dre’s debut solo album Da Chronic set a new bar for sub bass in hip-hop, making it the perfect accomplice for a ’64 Impala equipped with bouncing suspension and (as the name and cover image suggests) the occasional botanical cigarette.

Da Chronic also gave us Snoop Dogg, (still using his 'middle name', Doggy at this point) who Dr Dre put in the spotlight with multiple collaborations on the album. One of which, Let Me Ride borrows its drums from Bill Withers’ Kissing My Love. Once again, Gadson shows his incredible hi-hat technique on the song, keeping up a pacey shuffle throughout that requires stamina and feel to replicate properly. With Dr Dre’s funky bass and trademark squealing Mini Moog layered on top, it’s a perfect cross-section of burgeoning G-Funk.

Eminem: Just The Two Of Us/’97 Bonnie and Clyde

Samples: Just The Two Of Us

We’d wager that when Bill co-wrote Just The Two Of Us with Grover Washington Jr,  he was better-placed to predict Will Smith’s 1997 ode to paternity than soundtracking a fantasy body disposal. But that’s exactly how Eminem used samples and interpolations from the song on ’97 Bonnie And Clyde. Eminem’s early disdain for Will smith’s clean-cut rap style is well known, and Smith’s version of the tune delivers a sickly-sweet declaration of joy at becoming a parent. Eminem’s, meanwhile follows his journey with daughter Hailie - ex-wife Kim’s body in the trunk of his car -  to the beach, where he rolls the body off a pier, ending the last verse with the line “Ninety-seven Bonnie and Clyde, me and my daughter”. Still, just listen to those chords from the original!

Kanye West took aim at social justice on his track Roses, set to the backdrop of Withers’ bluesy piano chord progression from Rosie, and also includes vocal samples from the rack. Depicting his dying grandmother in a hospital, where the staff are as preoccupied with getting his autograph as they are with helping their patient. He is reported to be taking a swipe at Magic Johnson - a long-surviving sufferer of HIV - and the way he percieves celebrities to be prioritised in society with the line ‘You telling me if my grandma’s in the NBA right now she’d be ok?’. The original comes from Withers’ album Menagerie, released in 1978.

Shawn Mendes & Camila Cabello: I Know What You Did Last Summer

Every singer-songwriter and his capo have tackled Ain’t No Sunshine at one point or another, because it’s one of the greates songs ever written. But in 2015, Shawn Mendes and Camila Cabello borrowed the famous ‘I know, I know…” line for their song I Know What You Did Last Summer. Both singers have a go at it at various points in the song, and while we don’t think anyone will match-up to Bill singing the line, just-shy of 345 million people seem to have enjoyed the official video on YouTube.

Samples: Don’t You Want To Stay

Joe Budden and Eminem might not see eye-to-eye on a lot of things these days, but we think they’re united in their opinion of Bill Withers’ abilities to write a stellar groove.

Don’t You Want To Stay? from 1975’s Making music sounds almost baroque during its intro, then as soon as the beat kicks in, it has all the ingredients of a ready-made hip-hop sample, particularly from the bass line. Which is probably why Biz Markie, Kendrick Lammar and Tech N9ne have all based tracks  around it. Budden’s version appears on his 2005 mixtape, Mood Muzik 2.

When you’re already co-starring alongside Steven Seagal in a cop drama about the mean streets of Detroit, you might as well write some of the soundtrack too. That’s what rapper DMX did for his involvement in 2001’s Exit Wounds, and he used Ain’t No Sunshine as the basis for his tune. Changing the lyrics and keeping the melody, DMX declares ‘Ain’t no sunshine when it’s on” before bending the syllabic pattern slightly to fit in a threat to his rivals.

The ingredients of Bill Withers’ Ain’t No Sunshine fits extremely comfortably under a heavier groove, proving yet again that Bill’s contribution to music is immeasurable.