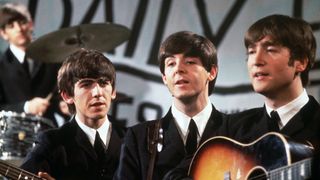 Although there are a lot of great songs that have great intros, in certain cases, the opening bars of a track become so instantly recognisable and iconic that they transcend the song that spawned them.

We're talking about intros that don't just encourage but compel you to keep listening, either because they build anticipation and lead into something great, or they're just so damn hooky that, even if you did turn them off, they'd still be in your head two days later.

MusicRadar's editorial team have selected their favourite intros of all time, telling you what makes them particularly special. If you can think of other intros that top our selections, let us know.

There's no magical arrangement work going on here: just the piano and bass playing the same, timeless riff; the guitar holding station on a single, chugging note; and, on the second pass through, some spritely strings.

No, in this case it's all about the quality of the hook - which is musically simple but impeccably timed - and the instant, certain knowledge that this is a groove that you're going to get along with. In fact, the first 30 seconds alone confirm why I Want You Back is regarded as one of the greatest pop records in history.

Whatever it is, the opening to A Hard Day’s Night is easily the most discussed first chord to anything, ever. Musicologists have pored over it in more depth that you’d have thought possible, but whoever was playing what and how, the iconic jangle of 12-string Rickenbacker, bass, piano and acoustic guitar announced the onset of The Beatles' imperial period. A Hard Day’s Night cemented the band's position as America’s favourite, and that impossible intro has since passed into legend.

Three notes. That's all it takes to know that you're about to be treated to Marvin's most lustful five minutes. Some great song intros are long and complex, but in this case, a simple, blink-and-you'll-miss-it wah guitar motif is all that's required.

There's something about the way that motif is played, though, with the slightly held-back timing building anticipation in a split second.

From the revving engine rumble of Vinnie “Mad Dog” Lopez’s drums to the very last tap on the glockenspiel, it’s one of rock’s most exhilarating 14 seconds. With over 11 guitars, pianos, organs and probably a few kitchen sinks, Bruce Springsteen rolls back the curtain on his widescreen love letter to Phil Spector, Leonard Bernstein, the Garden State, a girl named Wendy and suicide machines on highway 9.

In any other hands than Springsteen’s, and perhaps in any other song, this kind of epic sweep would seem like foolhardy hubris - the chrome-wheeled, fuel-injected kind. But when your backstreet Romeo comes on like a wailing James Dean and your Juliet is overcome with passion in a way that only Natalie Wood could understand, grandeur is the very point. Springsteen packs it all up in those 14 seconds.

This one's got it all: vintage Nile Rodgers guitar chops, horns blasting all over the place, and a drum track that stops and starts so much that it sounds like sticksman Tony Thompson was recorded falling down stairs with his kit on his back.

For the full impact, make sure you check out the more upfront Chic Mix, which appears on the Deluxe version of the Diana album.

Anyone who learned the guitar after 1995 strummed the opening to Wonderwall at some point.

The handful of chords that announced the biggest Oasis single of 1995 formed the hook of the whole song, and showcased Noel Gallagher’s melodic instincts at their best.

Everyone who owned an acoustic guitar went and bought a capo after this, and although it’s the song most likely to be played badly by ‘drunk bloke with mod haircut’ at house parties, the original hasn’t lost any of its power.

A fine example of an intro that doesn't bear any relation to the rest of the song, Let's Go Crazy's opening minute places Prince as a preacher, not altogether making sense but contrasting the struggles of life with the joy of something else: the afterlife.

Joining him in the pulpit is a cleverly crafted organ passage that switches to reflect the more optimistic tone, and, as we head towards the main body of the song, the distinctive sound of the Linn LM-1 drum machine and that unmistakable crunchy guitar riff.

Ultimately, although the intro to Let's Go Crazy doesn't give away what's about to happen, it tells you that it's something you want to stick around for. There's a cracking outro, too, but that's another story...

8. The Temptations - Papa Was A Rolling Stone

A masterclass in instrumental arrangement, producer Norman Whitfield pretty much defined the psychedelic soul sound with this monster intro.

Stretching to more than four minutes in the full version and featuring an incessant bassline, Wurlitzer electric piano, choppy guitar and atmospheric strings, it's made all the more remarkable by the fact that it doesn't move from its B flat minor chord.

This is the moment that Neil Young stepped out from the shadow of Buffalo Springfield and became the Neil Young that we know today.

A crunching riff played in an alternate tuning on Young’s then-new ‘Old Black’ Les Paul, it predates alt-rock and heavy metal by decades and definitely proves that Young rocks harder than anyone. It’s a potent example of the power of the early Crazy Horse line-up, too, Danny Whitten’s guitar fizzing alongside Young’s to devastating effect.

Longing, loss, heartbreak and a raging hard-on - somehow, Peter Green manages to transmit all that in one glorious guitar intro.

Green’s guitar playing was at its peak on this recording, and it’s about as great an example as exists of his near-mythical ’59 Les Paul’s honking tone. Throw in swelling strings and some of Mick Fleetwood’s most tasteful drumming and you’ve got an intro for the ages.

The snare cracks like a starting pistol, and Dylan leads his band out of the blocks like a man possessed.

Like A Rolling Stone is obviously a special track - a 6-minute long single that redefined what it was possible to do with a rock song - and the intro somehow sums up everything that is to follow in 11 short seconds. Swirling organs, jittery tambourines, twinkling pianos and jangling electric guitars come together to form a knotty, hypnotic whole; an impossible to ignore call to arms for a generation that was waking up to itself.

As an added bonus, Dylan released an interactive video for the song last year, proving that his restless, impish creativity is still as potent as it once was.

'Hypnotic' is often the word that's used to describe the Giorgio Moroder-concocted groove that powers Donna Summer's groundbreaking single. It's the jaw-dropping sequenced bassline that regularly gets the plaudits, but splendid as it is, don't underestimate the atmospheric power of the sweeping synth, which transforms itself from major to minor without you really noticing.

More than 35 years after it was recorded, listening to the opening of this still feels like you're opening a present that's been beamed down from space.

13. The Beatles - Come Together

The opening seconds of Abbey Road couldn’t be spookier. For the intro that serves as a repeated motif of Come Together, Paul McCartney plays a memorable, minimalist bassline that sounds like an owl hooting over a nighttime swamp. Ringo Starr’s sinister hi-hat pattern and rolling tom fills (the latter dampened with tea towels) underscore the eerie effect.

Even more unnerving is John Lennon, leaning into the mic and defiantly spitting out this tragically prophetic command: “Shoot me.” The last word is choked by handclaps, but the full force of the line works its way into your head almost subliminally.

Brian Jones’ gospel-infused, distinctive blues guitar lines that introduce The Rolling Stones’ Time Is On My Side melted millions of hearts in the UK in 1965. Oddly enough, American audiences got the song first, in 1964, but without the guitar part.

The Stones recorded a version with several seconds of Ian Stewart’s funereal organ as the opener in June 1964 in London, and that’s what the US heard on the radio in September of that year. Several months later, the Stones tracked a tighter version of the song in Chicago that featured Jones’ weeping guitar intro.

Either way, the intro pulls you in like a gentle prayer, setting the stage for Mick Jagger’s full-scale sermon that is by turns melancholy and cocky.

Earth, Wind & Fire’s first major hit tumbles down the stairs a little wobbly at first, with guitars and bass crunching together, entangling in an impenetrable thicket of sound before hitting the floor like a sure-footed (and extremely funky) drunken master.

The second half of Shining Star’s intro also serves as the musical bed for the verses, and with such a winning combination of jangly guitar, elastic bass and those dynamic horns, it’s no wonder that Maurice White didn’t want to keep a good groove down.

Is there any finer statement of intent within music than that at the opening of NWA’s 1988 gangsta rap masterpiece Straight Outta Compton?

“You are now about to witness the strength of street knowledge...”

The Edge releases three echo-treated harmonic blasts into the sky and lets them sing. In response, Larry Mullen Jr lurches into a stately drum roll, while Adam Clayton holds down the fort with booming bass notes.

After this majestic setup, the three take off in anthemic style, Adam and Larry locked in an almost military-like groove, and The Edge issuing perhaps his most iconic guitar pattern, a briskly strummed slapback sequence that has brought arena and stadium audiences to their feet for going on 30 years.

This stunning guitar riff is the leitmotif for U2’s rousing tribute to Martin Luther King Jr, but it’s one that is varied slightly throughout the song - sometimes Edge opens the notes up; other times he mutes their sound to match the dramatic shifts in Bono’s words. Appropriately, for the tune’s shattering climax, he’s playing to the heavens.

Kim Deal was responsible for some great intros with the Pixies - her coo-ing on the opening of Where Is My Mind? is a stone cold classic - but the fuzzy, false start intro to Cannonball has to be one of the most memorable alt-rock openings of all time.

Arguably the most iconic kick drum of all time, the Oberheim DMX-powered intro to Blue Monday provides the perfect introduction to the techno meets post-punk sound the Manchester band perfected in the mid-‘80s.

The band have since revealed in interviews that Gillian Gilbert faded the opening synth line in at the wrong time, leaving the whole intro slightly out of sync. The band felt the odd timing helped add to the song’s charm, however, and left the mistake in the final recording.