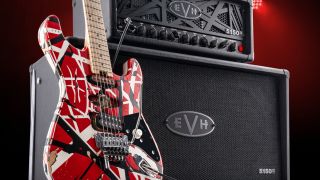 NAMM 2020: EVH Gear is going to make a lot of Van Halen fans happy this year with its stunning Striped Series Frankie – a meticulous replica of the iconic Frankenstein guitar with a very respectable £1,329 price tag.

For that money, you get a lot of guitar, a lot of Eddie Van Halen mojo. Once you get past the relic'd red, black and white striped finish, the Frankie features a basswood body with bolt-on, oil-finished maple neck, a 12"-16" compound radius maple fingerboard with 22 jumbo frets, EVH Floyd Rose double-locking tremolo with EVH D-Tuna for drop-D tuning on the fly. There's an EVH Wolfgang humbucker in the bridge, a dummy Strat pickup in the neck, and the sole volume control reads "tone" like the original.

The Frankie is joined by a whole fleet of Wolfgang Specials and Wolfgang WG Standards in a variety of cool new finishes, plus a revoiced EVH 5150III 50S 6L6 amp head and matching 2x12 cabinet. There has never been a better time to try nail Eddie's tone.

Controls-wise, there is a 500K EVH Bourns Low-Friction volume pot for performing those in-the-moment volume swells, while a 250K EVH Bourns High-Friction tone pot with prevent any accidental tweaking of the tone. There's a three-way pickup selector, an EVH Floyd Rose locking tremolo and D-Tuna as standard. Price is £1,329 (€1,519).

The Wolfgang WG Standards retail for a more affordable £465 (€529) for solid finishes and £495 (€559) for quilt- or spalted-maple tops. All have basswood bodies, bolt-on maple necks with 12"-16" compound radius baked maple fingerboards and 22 jumbo frets.

A pair of EVH Wolfgang humbuckers are direct-mounted in neck and bridge positions, with the three-way toggle switch positioned on the shoulder, and volume and tone controls for dialing in your tone. Sadly, there's no D-Tuna – that's a premium piece of hardware – but there is an EVH Floyd Rose Special double-locking tremolo for those all important divebombs and harmonic scoops.

So you've got the guitar, you've learned Van Halen I and half-way through the tab book for Van Halen II, now you need an amp. Enter, the EVH5150III 50S 6L6 amp head and cabinet.

Newly voiced for 2020, with more low-mid integrity in channel two, more low-end in channel three, the 5150III promises all of Eddie Van Halen's tone in one 50-watt head.

Under the hood there is a pair of Shuguang 6L6 power tubes, with 12AX7 tubes in the preamp.

While the channels have been revoiced, anyone au fait with previous editions of the amp will find it reassuringly familiar. Channels one and two share a three band EQ and have independent gain and volume controls. Channel three – the lead channel, if you will – has an independent three-band EQ, volume and gain. There are global controls for presence and resonance, adjustable bias, adjustable impedance between 4, 8 or 16 ohms, a MIDI input, and parallel speaker outputs. A four-button footswitch completes the package.

Check out our NAMM 2020 hub for the latest gear news, rumours and predictions.