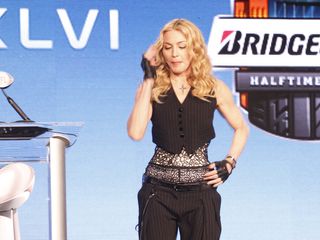 Madonna joins Up With People, Disney dancers, Prince, U2 and The Who as big game entertainment (Image credit: Chad Ryan/NewSport/Corbis)

With an expected viewing audience upwards of 110 million, the Super Bowl is a big, big show all right But it's still dwarfed by other "football" matches like the World Cup, which last year reached an estimated 700 million viewers.

One thing is certain, however: if you want to hit a captive, tortillas-and-chicken-wings-eating crowd with some new music, the Super Bowl is a slam-dunk opportunity. Oh, wait, wrong sport. But you know what we mean.

This year, Madonna performs at XLVI - and according to rumor, her set will feature guest appearances by M.I.A., Nicki Minaj, LMFAO and Cee Lo Green. The Material Woman's, uh, Girl's performance follows recent gridiron gigs by the Black Eyed Peas, Paul McCartney, Prince, The Who, Bruce Springsteen, Tom Petty and U2. Oh, and Janet Jackson - how could we forget Janet Jackson?

While Super Bowl halftime shows might be regarded by some as mainstream - let's face it, you're never going to see Cat Power on the 50 yard line - the truth is, they were a whole lot worse back in the day. We're talking marching bands, Mouseketeers and the like.

The following is a brief video look at the development of Super Bowl halftime shows over the years. Prepare to be stunned.