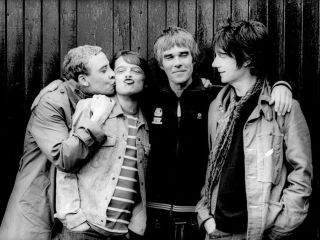 The old gang, back together at last (Image credit: Pennie Smith)

Following rumours, tabloid reports, speculation and "two or three offers a year" to reunite since their acrimonious 1996 implosion, today the classic Stone Roses line-up appeared together at a Soho press conference to confirm that they have reformed.

Anticipation among fans reached fever pitch yesterday, with The Sun newspaper breaking the story that one of Britain's most-loved guitar bands of all time are set to play two massive homecoming shows in 2012 at Manchester's Heaton Park.

At this afternoon's press conference, Ian Brown, John Squire, Mani and Reni revealed that not only will the Heaton Park shows be followed by a world tour, but also that the band intend to showcase new material. Does this mean that a new album is also in the works?

The singer also revealed that the first song the reunited Roses played together was Shoot You Down from their legendary debut LP. "It was like getting your own private lapdance," Brown explained.

Asked how long the 2012 tour will last, Brown replied, "We'll ride until the wheels fall off."

Visit the new, official Stone Roses website for ticket information and to sign up for exclusive news.