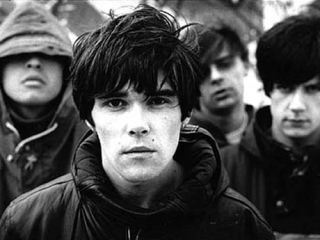 It's the reunion story that just won't go away. Despite numerous false alarms, there is growing speculation that Tuesday 18 October 2011 will see The Stone Roses announce a string of comeback shows including a huge homecoming at Manchester's Heaton Park.

Despite both frontman Ian Brown and guitarist John Squire denying similar rumours in the past - Squire even saying 'no' through the medium of visual art back in March 2009 - The Sun's Showbiz Editor Gordon Smart seems confident that the original line-up of one of Britain's greatest ever guitar bands is set to appear together publicly tomorrow for the first time since 1996.

This morning, The Sun also reported that magician Dynamo - a close friend of Ian Brown - had shown Smart a text message from Brown that read: "We are going to rule the world again. It's happening."

A cryptic statement on Friday in a message to the NME from original Roses drummer Reni is being regarded by the tabloid as a "red herring", with The Sun reporting that Manchester rock royalty such as Shaun Ryder and Elbow's Guy Garvey have also confirmed the Stone Roses reunion rumours.

If the rumours are true, it appears that the catalyst came when Squire and Brown "buried the hatchet" at Roses bassist Mani's mother's funeral in April of this year.