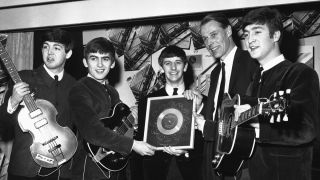 George Martin (second from right) with the Beatles in 1962. (Image credit: Hulton-Deutsch Collection/CORBIS)

Sir George Martin, the legendary producer who was frequently referred to as 'the fifth Beatle, has died at the age of 90, it's been confirmed.

Martin was at the helm for almost all of The Beatles' albums, and only last week was voted by MusicRadar users as the greatest music producer of the '60s. He signed The Beatles to Parlophone records in 1962 and worked with them until their break-up in 1970.

He also produced hits for other artists, including Matt Munro, Cilla Black, Gerry & the Pacemakers and Shirley Bassey.

George Martin's passion for music was evident from an early age, and he studied piano and oboe at the Guildhall School of Music and Drama between 1947 and 1950. He began his career in the BBC's classical music department, quickly joining EMI and then becoming head of EMI imprint Parlophone in 1955.

Prior to his period with the Beatles, Martin worked on numerous novelty and comedy recordings, collaborating with the likes of Petter Sellers, Spike Milligan, Peter Cook and Dudley Moore.

Martin is widely acknowledged to have had a significant influence on the development of The Beatles' sound. His classical training enabled him to help the band to take their music in more expansive directions; it was his idea to include a string quartet in the recording of Yesterday, for example, and he played the role of arranger on many Beatles recordings.

Martin was also willing to experiment, working with engineer Geoff Emerick to use the studio technology available to them in new and innovative ways.

Following the break-up of The Beatles, he continued to produce other artists and to work on film and TV projects. He also founded Air Studios, and in the mid-'90s was reunited with Emerick as they oversaw post-production of The Beatles Anthology project.