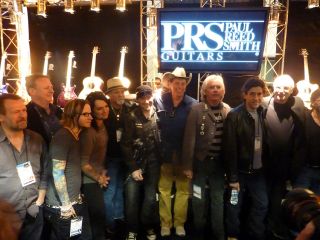 Make no mistake, most NAMM press conferences are pretty tedious affairs. However, when we heard that Paul Reed Smith was celebrating 25 years in the game, a supporting cast of big-name guitarists was guaranteed.

Here are the highlights, featuring such PRS lovers as Ted Nugent, Al Di Meola and Carlos Santana talking about how they first became acquainted with the Maryland luthier, and of course plenty from Mr PRS himself.

NAMM 2010 has already seen PRS launch the 30 Combo amp, five new signature SE guitars and an SE for metalheads. For all the latest from the show, keep it MusicRadar and bookmark our ultimate NAMM 2010 guide.