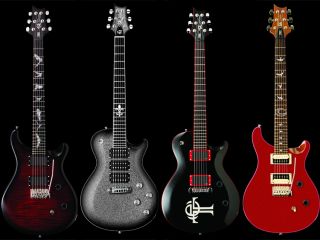 PRESS RELEASE: PRS Guitars is proud to announce that Orianthi, Zach Myers of Shinedown , Paul Allender of Cradle of Filth, Mike Akerfeldt of Opeth and Nick Catanese of Black Label Society will have their signature SE models unveiled at the 2010 Anaheim NAMM show.

Built in Korea to signature artist and PRS's specifications by skilled craftsmen, the SE series offers an unmatched combination of incredible quality, sound and price.

PRS has worked closely with each artist to present a guitar that identifies with their style, both musically and visually. Although they have worked with PRS for years, these are debut signature models for Orianthi, Myers, Akerfeldt and Catanese.

EMG pick ups as well as old school birds, an appointment that up until this year has been reserved for Maryland made PRS guitars, come standard on several of these new artist models.

A classic PRS sound with white pearloid birds and red sparkle finish, the Orianthi SE model is the very first signature model instrument bearing the guitar goddess' name. It comes standard with a Korina back and maple top, 24 fret wide-thin maple neck with 25" scale length and an ebony fretboard featuring white pearloid birds and an "O" at the 12th fret.

"This PRS is perfect for anyone who wants an awesome quality, versatile rockin' lookin' guitar - at an affordable price - I love it. Try it out."

As the lead guitarist of a band with more than six million albums sold worldwide, Zach Myers is certainly no stranger to hard rock licks. In support of his blazing guitar skills, PRS and Zach designed his very first signature model.

"When I was approached about doing a signature model with PRS, I knew that in my career I had reached every goal I had wanted to reach. This model is based off of my two favorite PRS guitars, one being the first PRS I ever owned. This SE model holds up to both of those guitars as a players guitar that can take a beating…I have put everything I am into this guitar and can't wait for you to hear it."

As the lead vocalist and guitarist for the acclaimed death metal band Opeth, Mikael traverses the musical terrain with sounds that are "subject to savage punctuations of death metal fury at any given moment."

"I'm a writer, a rhythm, lead and acoustic player. I try to be as versatile as possible, that's why I needed a guitar that can match those ambitions both live and in the studio. On top of things, it is proper eye candy too."

Nick Catanese and PRS have created a signature model SE worthy of Nick's "Evil Twin" moniker. Starting with an extra-thick Singlecut mahogany body, the guitar tops off with a Gloss Black finish with red binding on body, neck and headstock, and and "Evil Twin" logo on body.

"I have a home that knows how to make an elegant weapon. PRS is a guitar players home." Nick Catanese

Cradle of Filth guitarist's ever popular model is updated with new pickups and new colors for a filthy new take on Paul Allender's namesake ax. Now available in available in Emerald Green Burst or Scarlet Red Burst, the double-cutaway mahogany body still has a flame maple veneer and a special arm carve. Additional features include rounded edges on the body, maple neck with ebony fretboard, 24 jumbo frets and the bats in flight inlay.