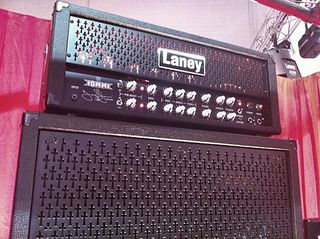 Frankfurt Musikmesse 2012: Towering over the show floor like the riff lord himself, the Laney TI100 Tony Iommi signature amp is big news for metal and heavy rock guitarists.

Here's the official word from Laney:

"It's been four decades since Black Sabbath unleashed heavy metal onto an unsuspecting world and became a truly global musical phenomenon. We at Laney are extremely proud to have played a part in this sonic revolution - back in the day Tony Iommi's amp of choice was a Laney L100BL.

"Since this auspicious day Laney's association with Tony Iommi has gone from strength to strength resulting in the launch of his first signature model, the GH100TI, originally called the GH100S, almost 20 years ago.

"Born out of an exhaustive period of product development, carried out hand in hand with Tony, with Tony bringing unique insight, suggestions and innovations at every stage of the process, whilst continually assessing and refining the sonic character of guitar tone.The result - what we think will be the most significant amp launch of 2012.

"The TI100 features: 100 Watts RMS, 4 x 6L6 output section, twin channels, footswitchable variable pre boost on each channel, three-band EQ, volume, enhance, and presence. The amplifier is finished off with Tony's trademark livery and to top it all it even glows an ominous red.

"Tony had this to say about his new amplifier: 'Almost 40 years ago I embarked on my musical journey with Laney. My first signature Laney amp, the GH100TI came out almost 20 years ago and it served me faithfully on the biggest stages in the world with Black Sabbath as well as recently with Heaven & Hell.

"'I'm always searching for more out of my tone, more flexibility, more dynamics and that's where my ideas for the new TI100 came from. It took time and dedication to get it right and I'm happy to say I was involved in each step of the amps design, development & testing. The end result is a signature amp that I am extremely proud of and happy to stand in front of anywhere in the world. The TI100 represents everything I've ever wanted in an amp, it's fabulous.'"