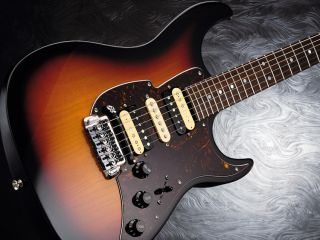 MUSIKMESSE 2011 Press Release: Between 6-9 April, the musical instrument world will gather in Frankfurt for the annual Musikmesse, the largest show of its kind in the world.

This year, worldwide trade distributors John Hornby Skewes & Co Ltd is gearing up for a mammoth show. The JHS stand will be at Hall 4.1 F17, and will showcase the full range of guitars and basses now distributed in more than 70 countries around the globe.

The much-lauded Fret-King Super-Matic self-tuning guitar will receive its European launch at Musikmesse. The first ever guitar to feature the revolutionary Wilkinson ATD HT440 self-tuning hard tail guitar bridge, the Super-matic features six preset tunings, allowing the player to move from standard tuning to open E, open G, DADGAD and more in just a few seconds. Set to revolutionise the way players approach their instruments, the Super-matic is this year's must-see item.

Another high-profile European debut is the Fret-King Black Label JD guitar, co-designed with renowned guitarist Jerry Donahue. Set to be released in summer 2011, the guitar has been built to Jerry's exacting standards, and will enable players to experience the unique sounds of his custom-wired pickups. Jerry himself will be on the JHS stand throughout the Musikmesse, where he will play a number of sessions and meet with journalists and fans.

Alongside Jerry on the JHS booth will be respected German writer, player and producer Martelle, whose top quality playing has featured on records that have sold more than two million copies in total. Other musicians set to appear on the stand include Procol Harum guitarist Geoff Whitehorn, German guitar virtuoso Thomas Blug, and Dave 'Bucket' Colwell, ex-member of Bad Company.

On the evening of Friday 8 April, Geoff and Thomas will join Jerry and Martelle for a one-off supergroup gig in Offenbach, near Frankfurt city centre. The gig, which costs €10, is sure to feature bags of top-class musicianship, as well as plenty of Vintage and Fret-King guitars.

Designer and all-round MI guru Trev Wilkinson will also be in attendance to chat about his newest creations and all his guitars and accessories.

The whole Fret-King range will be present at Musikmesse, including the Blue Label series, the UK-made Green label series, and a number of Trev Wilkinson's unique one-off luxury guitars that fall under the Stvdio and Atelier banners. See exclusive videos of Trev talking through the Fret-King range in-depth here.

A wide selection of the immensely popular range of Vintage guitars will be on show, spearheaded by the all-new Vintage V100AFD Paradise, a chunky single cutaway rocking machine with a gorgeous carved maple cap and a pair of Wilkinson Zebra humbucking pickups.

Reliced guitars are hot stuff at the moment, and the Vintage Icon range offers a number of classy models with distressed finishes, including signature models for renowned guitarists like Mick Abrahams (of Jethro Tull and Blodwyn Pig fame) and Thomas Blug. The classic Vintage Reissued series, redesigned and revamped by Trev Wilkinson, will be out in force, showcasing its mix of familiar yet distinctive designs and superior tones. Four stringers will also be catered for with the range of Vintage bass guitars.

The award-winning Vintage Acoustic range of guitars will be on display. Of particular interest is the Vintage Gordon Giltrap signature guitar - available in 6 and 12-string models - which has been receiving rave reviews across the board since its release.

For players who favour nylon string setups comes the Santos Martinez range of classical and electro-acoustic classical guitars. Suitable for players of any age or standard, the superior tones and excellent playability of these guitars have made them a favourite classical weapon for many musicians, including classical guitar virtuoso Raymond Burley.

Finally, the funky and colourful SpongeBob SquarePants Real Musical Instruments will also be at Musikmesse, with a number of the beginner-friendly guitars, ukuleles and musical accessories lighting up the JHS stand.

Make sure you stop by at the JHS Messe stand at Hall 4.1 F17 to check out the full range.