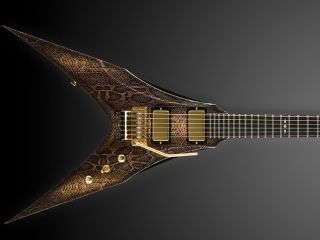 FRANKFURT MUSIKMESSE 2010 PRESS RELEASE: DBZ Guitars travels to Frankfurt, Germany next week to reveal the new Venom Snake Skin guitar along with its entire line of guitars at Musikmesse, the world's leading trade fair for music.

This is the first time Dean Zelinsky will take his new company, DBZ Guitars, to display at the show and is in direct response to the international success the new line has experienced during its first year. The new Snake Skin finish achieves unparalleled realism, in both looks and feel, using Zelinsky's proprietary techniques.

Master guitar builder Dean Zelinsky has earned the reputation of taking guitar building to the next level. In 2008, Zelinsky severed ties from his previous company and established DBZ Guitars to pursue new opportunities and production techniques currently being ignored by the guitar industry.

The Venom Snake Skin represents a new standard in guitar design and encourages Zelinsky to continue expanding on his 30-plus years of innovation. The Venom Snake Skin guitar is an art form brought to life by artisans who meticulously airbrush and hand finish each guitar to the finest detail - a true milestone and a symbol of his extensive guitar building career that started back in 1976.

In addition to the new textured Snake Skin finish, features of the Venom Snake Skin include:

As a life-long vegetarian, Dean Zelinsky proudly confirms that no animals were harmed in the production of these guitars.

To learn more about the new Venom Snake Skin, and the entire DBZ Guitars collection, visit the company website at www.dbzguitars.com or visit their booth at Musikmesse Hall 4.1 F18.