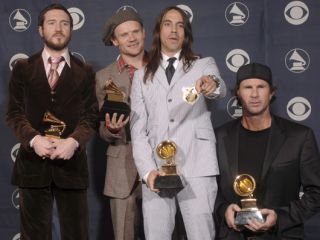 It would appear that John Frusciante is no longer working with the Red Hot Chili Peppers - so says a source close to the band in an exclusive interview with MusicRadar.

"Josh Klinghoffer has been playing with the group for a couple of months now," says the source. "Optimistically, the Peppers are trying to lock down a replacement for John, who has apparently quit.

"Mentally, John checked out a long time ago. He's interested in doing his own thing, his own albums - the whole big rock band machinery just doesn't appeal to him anymore."

The news that Frusciante has quit can hardly be viewed as surprising. During a podcast interview with MusicRadar earlier this year, the guitarist was lost for words during a routine question about the status of the group. He paused for nearly 30 seconds (later edited) before awkwardly stating that the Peppers had "no plans."

Frusciante also refused to be introduced to be as 'guitarist for the Red Hot Chili Peppers,' preferring instead to be called, simply, 'guitarist.'

Frusciante has up and quit before

This wouldn't be the first time Frusciante has split from the band: Overwhelmed by the success of Blood Sugar Sex Magik, he quit in 1992 and descended into heroin addiction. After kicking drugs cold turkey, he rejoined the Peppers in 1999 for the album Californication (the group had fired his replacement, Dave Navarro, a year earlier).

Still, the past decade hasn't been an easy ride for Frusciante. Intensely private, he has issued a number of wildly experimental, introspective solo recordings - a stark contrast to the over-the-top, circus-like antics of life in the Chili Peppers. Rumors of his commitment to the band resurfaced late last month when, during an interview with Classic Rock magazine, drummer Chad Smith, responding to a question about Frusciante's involvement, stated: "Well...at this time I can't talk about that. I have been told to stay away from the John questions."

Oddly enough, Klinghoffer is not only friends with the Chili Peppers but with Fruscinate as well. "Josh has been on everybody's radar for quite some time," says the source. "He's extremely popular within a certain circle of LA musicians.

"The big thing right now that the band will have to consider is, Can Josh write great songs? Can he help push them forward? Everybody knows he can play, but the Peppers need somebody who can come up with amazing material and get them moving again."

Following the original posting of this story, John Frusciante has now confirmed that he has left the Red Hot Chili Peppers. You can read the update with John's comments here.