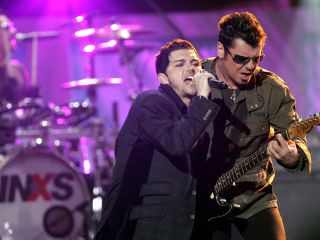 Tonight, JD Fortune is hoping to 'Kick'-start his way back into INXS (Image credit: Mario Anzuoni/Reuters/Corbis)

Is singer JD Fortune back in INXS? Apparently so, at least for one show, tonight, 24 February, when the group plays at the Winter Olympics in Vancouver.

For the performance, Fortune is listed as a 'special guest,' leading us to believe that his reversal of fortune is not yet fully realized.

As you may recall, Fortune, who was picked to front the '80s hitmakers on a reality show, claimed he had been sacked by the band last year - literally ditched at a Hong Kong airport - and was then reduced to living in his car.

According to Fortune, INXS were "cold and clinical" in how they booted him. "They said, 'Thank you very much.' I found myself really alone because I had traveled with these guys for 23 months. I don't know where I am going...from sofa to sofa, from night to night. I am trying to get through my life."

Fortune later retracted his comments, saying he "misquoted himself" and admitted his heavy cocaine use might have played a part in his sacking.

Tonight's Olympics show will be the first show of what INXS is calling the start of a major world tour, although no additional tour dates have been announced.

The group is set to release an album of their own songs with guest vocalists such as Rob Thomas and Brandon Flowers. Is JD Fortune on the CD? Nope.

Support for Fortune is strong on the INXS Facebook page, with most fans insisting that the singer be reinstated in the group full-time. It's a strange soap opera, and something tells us it isn't over yet.