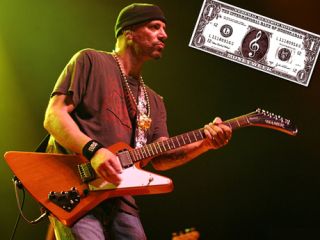 Even better than the real thing? According to Joseph Cumia, who portrays The Edge in 2U, "we're the best U2 tribute band out there."

When U2 tour the world, it's a massive operation, requiring three separate 'Claw' stages transported by 120 trucks and over 200 staff and local crew personnel. When 2U, the Long Island-based U2 tribute band hit the road, things are a little different: they pack the whole shibang - musicians, gear and the occasional roadie - into one Ford E-350 14-passenger van.

"We run it like a military operation," says guitarist and band manager Joseph Cumia, who portrays The Edge in 2U. "In fact, I used to be in the service, so I know how to run a team. The lights, PA, the backline - it's all self-contained. From soup to nuts, we can do it all ourselves. The band members alternate driving and sleeping. That's life on the road."

But life on the road for Cumia and the rest of 2U (Gene Marchello - Bono; Denis Perry/Pat Rotollo - Adam Clayton; Timothy Bellew - Larry Mullen Jr) isn't bad, especially these days now that they've all managed to quit their day jobs and focus on the group full-time. "After years of playing in various original and cover bands, I finally decided to do something that I knew would work," says Cumia. "One day I just said to myself, 'U2 is the biggest, most-popular band in the world. A U2 tribute band can't miss.'"

Since forming 2U over 10 years ago, Cumia, the only constant member, estimates that he's been through "eight Bonos, four Larrys and three Adams. Still, each incarnation of 2U is an improvement over the previous one. I think the current lineup is the best U2 tribute band out there."

In honor of Money Week on MusicRadar, we sat down with Cumia to talk about the ins and outs of forming a successful tribute band. The guitarist sees no downside to making a living playing another group's music. "I'm doing what I've always wanted," he says. "I'm a professional musician. So I don't make my living with my own music - hey, it still beats working a day job. I make a ton of people happy by playing the guitar. Tell me what's wrong with that. You can't."

For a while, there was quite a stigma attached to being in a tribute band. Over the past few years, that seems to have changed.

"I would agree. Look, there are good bands and there are bad bands, whether they're cover or original. A lot of original bands that people know by name probably won't last as long as we will. To me, the only stigma is if you're bad. [laughs] Go to Vegas and you'll see good Elvis impersonators and bad Elvis impersonators. Same thing with tribute bands. By the way, there's a very big difference between cover bands and tribute bands."

And that difference is?

"A cover band will play many songs by many bands of various genres. They'll do John Denver songs and then they'll do Loverboy songs - they don't specialize. A tribute band plays a show as a specific group. To be in a tribute band, you have to be part musician, part thespian. You're not only re-creating the music of that band, you're giving people the experience of being at that band's show. It's a whole different ball game."

Gene Marchello as Bono in 2U. He has "that magic you look for," says Cumia.

How long has this lineup of 2U been together?

"Probably about a year and a half. The last guy to come on board was our Bono, Gene Marchello. Funnily enough, I used to play bass in his dad's band, The Good Rats. Gene was in that band for a while, too - he played guitar. So we have a bit of a history together."

How soon after forming 2U were you able to quit your day job?

"Like any band, it was a building process. I pretty much manage the whole business. For a long time, I didn't turn down a single gig. No show was too small. In all, it probably took about five years before I was able to quit the day job. It started out as just a weekend thing, but now we're booked solid for months and months to come. It's a beautiful thing."

You copy The Edge's current look very accurately - you rock the ski cap and all that. When scouting other prospective bandmates, how many candidates do you go through?

"You put the feelers out in all the various ways. It's one thing to play like Adam Clayton, but to be in a great U2 tribute band you have to look somewhat like him. It's all about capturing an aura. Gene Marchello, my current Bono, wasn't always the Bono that he is now - he's a work in progress. He always had the pipes, but his look and the rest of his game has been coming to him.

"I've had so many types of people come to me over the years. Asian Bonos, Hispanic Bonos, African-American Bonos… all types. A lot of them have been excellent. Gene had that special thing about him; he had that magic that you look for."

Do you play U2's entire repertoire?

"Absolutely. You name it, from I Will Follow to the new stuff, we do it all. We leave nothing out. Currently, we have four solid hours of U2 music that we can play. Depending on the audience, we'll tailor the show appropriately. If it's something like the New York Roadrunner's Club, which we did yesterday, we give them just the hits - we're just there as entertainment. But if it's our show and we're playing for hardcore U2 fans and they're paying money to see us, we'll give them the deep cuts.

"The true U2 fans want a real experience; they want to feel as if they're at a U2 show. For them, we'll do U2's Red Rocks show from 1983. We'll play things songs like Red Hill Mining Town or A Man And A Woman - with hardcore U2 fans, we can go deep. Two Hearts Beat As One - all the songs U2 don't do any more for whatever reason, we'll play them."

What size venues can 2U play these days, and what kinds of fees can you command?

"From a business standpoint, I would tell a musician to play any size venue. Unless you can really say no, don't - you never know when one booking will lead to another. We routinely play small clubs and charge fees in the low four figures, but we've also played large corporate shows - those gigs pay in the low to mid-five figures."

"Around there. Those gigs are the exception, not the norm. But a good tribute band, if they know how to work their business, can command decent money. We take care of four guys, and we're all able to support our families on what this band generates. Nobody's getting rich, but we're self-sufficient, which was always the dream."

Guitar-wise, you do a great job of emulating The Edge's sound and patterns. How extensively have you studied his style?

"A lot of work goes into doing what I do. As you know from interviewing him yourself, The Edge's style is so unique and quirky. It's a constant work in progress; in fact, I'd say he's a work in progress himself! [laughs] Emulating a guy like that is a real job, but I think the most important thing you can do is use your ears and really try to get inside his head.

"There's a bunch of other U2 tribute bands, and I see some of the guys who do what I do - they go out and try to buy the same equipment that The Edge uses, thinking that's the key to it all. But what The Edge uses nowadays is so switched-up and customized, there's no way you can compete. What I use is an all-in-one pedalboard, a DigiTech RP500 - it gives me all the sounds I need. And it also gives me the DigiTech Whammy Pedal, which Edge uses in songs like Even Better Than The Real Thing and, more recently, the song Magnificent.

"I also use a BBE Boosta Grande, which gives me a 20dB boost. Put it this way: if you're on 10, you can go to 11, as they say in Spinal Tap. [laughs] It's that little bit of a nudge that you need sometimes. One other thing I use is a Boss DD-20 Giga Delay. I don't use that for the guitar, though - I use that on Gene's vocals. Certain songs like I Will Follow need that real sweeping delay, and I can't always depend on a soundman to do it. So, I take cake of that myself. I'm one-stop shopping." [laughs]

Joseph Cumia can tap into all of The Edge's sounds with a minimal amount of effects.

Tell me about your guitars. Obviously, you can't carry around the arsenal of instruments that The Edge takes out with him.

[laughs] "Nor can I afford them! I used to play an old Hamer Explorer - that guitar's in pieces right now. But I do have an actual 1977 Gibson Explorer, which is the same guitar that The Edge uses. I have a couple of Strats, as well. One is a single-coil all the way through, which is modeled after a 1959 Strat, and the other is an SSH, which is from 1987. All of these guitars give me everything I need, really. I could take out more, but I wouldn't have the room in the van. I can get all of the right sounds out of these guitars, so I keep things basic."

"I own an AC30, but I rarely use it. Live, I use an AC15, the little brother to the AC30. It puts out half the wattage, but it still gives you an amazing sound. So far, I've been able to play any size venue with it, and I've never had a problem. It's great."

Have any of the members of the real U2 seen you?

"Nobody from the band, but The Edge's guitar tech, Dallas Schoo, has seen us. We were playing outside the Philly Spectrum a few years ago, and Dallas came out of the arena to check us out. He couldn't believe the xylophone beginning I had for the song Bad. He was really cool, very complimentary.

"I did get a chance to meet The Edge and Adam Clayton at one of Edge's Music Rising events. We hung out with them for a little while. They were both very nice. Edge wouldn't sign one of my Music Rising guitars, though. Adam did."