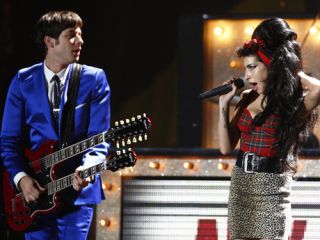 The death of Amy Winehouse has brought about an outpouring of grief and admiration from musicians across the globe (Image credit: Luke MacGregor/Reuters/Corbis)

Among the music stars paying their respects to Amy Winehouse is her former producer Mark Ronson, shown here performing with the late singer at the Brit Awards in 2008. © Alessia Pierdomenico/Reuters/Corbis

An autopsy on the body of Amy Winehouse, who died yesterday (Saturday 23 July) at the age of 27 in her apartment in Camden, London, will take place sometime within the next few days.

Since word of the singer's death hit the internet, her Grammy-winning 2006 album Back To Black jumped to the top of the iTunes chart. Meanwhile, on Twitter, Facebook and statements issued to the press, music stars by the score have been paying tribute to the troubled late vocalist. Here are some of their comments:

Mark Ronson, Winehouse's former producer: "She was my musical soulmate and like a sister to me. This is one of the saddest days of my life."

Tony Bennett, who last March recorded the classic standard Body And Soul with Winehouse for his upcoming Duets II (watch a video of Bennett talking about the album and, in particular, Winehouse, at the end of this piece): "I am deeply saddened to learn of her tragic passing. She was an extraordinary musician with a rare intuition as a vocalist and I am truly devastated that her exceptional talent and has come to such an early end. She was a lovely and intelligent person and when we recorded together she gave a soulful and extraordinary performance.

"I was honored to have the opportunity to sing with her. It had been my sincere hope that she would be able to overcome the issues she was battling and I send my deepest sympathy to her father Mitchell, her entire family and all of those who loved her."

Lily Allen: "It's just beyond sad, there's nothing else to say. She was such a lost soul, may she rest in peace."

Billy Corgan: "Sad to hear about Amy Winehouse. I mourn any time one of our own passes on. A tragedy...no doubt. Truly sad."

KT Tunstall: "Absolutely tragic to hear Amy Winehouse has died. What a terrible waste. So, so sad."

Ryan Adams: "It makes me angry to think after years of being a punching bag in the press that it takes the death of Amy Winehouse for her art and life to be treated with any amount of respect. For every slurred line or stumble paraded in newspapers or across the internet & tv there was a real person with real issues who's life and works were marginalized in order to exploit her sickness. What a shame."

Moby, who was with Winehouse during her performance last month in Serbia, one in which she was booed off the stage: "After our show in Serbia I wish I'd been able to help amy. I'm sorry."

Nikki Sixx: "Drugs suck. How much clearer does the message have to be? R.I.P. Amy Winehouse."

Dave Navarro from Jane's Addiction: "My God! So sad to hear about Amy Winehouse! My deepest condolences to her friends and family and fans. You will be missed Amy xoxox."