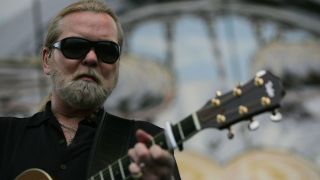 "It is with deep sadness that we announce that Gregg Allman, a founding member of The Allman Brothers Band, passed away peacefully at his home in Savannah, Georgia," said the official statement.

"Gregg struggled with many health issues over the past several years. During that time, Gregg considered being on the road playing music with his brothers and solo band for his beloved fans, essential medicine for his soul. Playing music lifted him up and kept him going during the toughest of times."

Duane and Gregg regrouped in 1969, and The Allman Brothers, a band that was to reach global fame in the 70s, was born.

Keyboard player and lead singer Gregg was also the writer of many of their biggest hits, including Midnight Rider and It's Not My Cross To Bear.

The band broke up in 1975, and Allman embarked on a successful solo career with The Gregg Allman Band, before The Allman Brothers reformed, performing from 1989 to 2014.

His latest solo album, Low Country Blues, was released in 2011.

Cher, who was married to Allman in the 70s, paid emotional tribute to the southern rock pioneer last night.