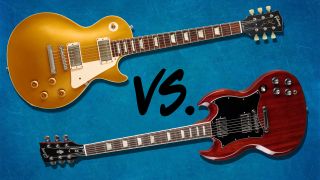 The Gibson Les Paul vs SG debate has raged on for decades. Both models have plenty of rich history and iconic players in their corner, but which one is the right electric guitar for you? This article includes all the information you need to help you decide.

In 1961, the company replaced the original single cutaway model with the new double Devil-horned beast we now know and love as the Gibson SG. Here we compare these two rock'n'roll icons, and help you find the right one for you. And you won't have to sell your house, or wrestle with Joe Bonamassa, to get your dream guitar…

Looking for a great deal on a new guitar? With Black Friday incoming, now is the perfect time to be looking for great Black Friday guitars deals. We'll be sharing the very best offers on MusicRadar throughout the event.

Les Paul vs SG: the history

Inspired by guitarist and inventor Les Paul, his namesake guitar was born in 1952 as a direct competitor to Fender's Telecaster. These first 'goldtop' guitars had a maple-topped mahogany body, P90 single coil pickups and a combined bridge and trapeze tailpiece. In 1954, the Les Paul became a range with the black finish/gold hardware Custom and the entry level single P90 loaded Junior. The twin P90 Special followed a year later.

By 1958, the Les Paul 'Goldtop' was the 'Standard'. This ultimate spec model came packing two new PAF ('Patent Applied For') humbuckers, a tune-a-matic bridge and stop tailpiece, and a translucent cherry sunburst finish. The '58 to '60 'Bursts' are now considered the greatest electric guitars of all time. Jimmy Page told us that.

In 1961, due to poor sales figures, Gibson drastically redesigned the Les Paul range. The company needed something that would compete with the hugely popular Fender Stratocaster. The solution was a lightweight mahogany only body, two humbuckers and a slim mahogany neck. These guitars were still known as Les Pauls (Standard, Custom, Junior, Specials) until the series was renamed SG ('Solid Guitar') in 1963. The SG Standard is the biggest selling Gibson electric guitar ever.

Les Paul vs SG: the players

Someone once said, "you can tell the character of an electric guitar by the company it keeps".  Actually, it was us... just then. The late-’50s Les Paul 'Bursts' are now iconic chiefly thanks to Eric Clapton using one for the recording of the '66 John Mayall's Blues Breakers With Eric Clapton (aka 'The Beano Album'). This record is still considered by many to feature the seminal Les Paul Standard tones.

As for the SG, Gospel singer and rock'n'roll pioneer Sister Rosetta Tharpe put it on the map with her triple 'bucker Custom; Beatle George Harrison made it cool; and AC/DC's Angus Young transformed it into a hard rock icon. Other notable SG partners include Black Sabbath's Tony Iommi, Robbie Krieger of The Doors and post-Jam Paul Weller.

Les Paul vs SG: the tones

At the heart of most Les Pauls and SGs is a chassis formed from mahogany. Although some ‘50s Les Paul Customs came with mahogany tops, most Les Pauls feature a carved maple cap. This adds a touch of brightness to the tonal depth provided by the mahogany core. A good Les Paul will provide plenty of sustain – just ask Spin̈al Tap's Nigel Tufnel.

Thanks to Angus Young and Tony Iommi, we all know how splendidly the classic all-mahogany SG nails hard rock. It also has a trademark snarl when used with overdrive. Listen to Paul Weller play his live for the tonal exhibit A.

One thing players often miss out on when using Les Pauls and SGs is just how much tonal range and subtlety you can get by manipulating the volume and tone controls. Try it. You'll find that these guitars offer far more than three tones.

Les Pauls and SGs feature the classic Gibson 628mm (24.75") scale length. Shorter than the 648mm (25.5") scale of Fender Telecasters and Stratocasters, this makes strings easier to bend. A set of .010 gauge strings on a Gibson will feel lighter than the same set played on a Fender.

Many recent Gibson guitars come with a 'Slim Taper' neck. This approximates the feel of early ‘60s Gibson SGs. If you prefer something with a bit more meat on its bones look for a ‘50s spec model. Gibson neck shapes got slimmer as the decade went on. The '57 and '58 Les Pauls are generally chubby while the '60 model is pretty thin. The '59 Les Paul neck shape is regarded by collectors as the sweet spot.

Don't forget to ask your vendor how much a prospective purchase weighs. Les Pauls can weigh anything from 8.5 to ten pounds. Some ‘70s-era models weighed way more than that. As a general rule, an SG will probably come in around the seven pound mark. Weight is important if you're going to love your guitar longtime, hanging from a strap at a rehearsal or gig.

Don't just compare Les Pauls and SGs, also try guitars with humbuckers and P90s. The latter pups can be a bit noisy - they don't 'buck' hum, natch - so be aware of that. They do however sound incredible.

When it comes to the battle of Les Paul vs SG, which ones are best? Check out our hot picks below.

The classic that almost never was...

You can get the Les Paul Standard in either '50s or '60s editions. The difference? Well, aside from the fact that the '50s model is available with P90 single coils or humbuckers, there's the neck feel. The '50s model has a chunkier neck. The '60s LP boasts something a bit skimpier. Given that the Les Paul barely encroached on the 1960s before it was axed, the neck echoes those fitted to the early SG-bodied LPs.

Both guitars feature the classic mahogany back and neck and contoured maple top format that's excited everyone from Keith Richards to Joe Bonamassa. For those of you that have a problem with Gibson messing with the original blueprint, these new Les Pauls are non-weight relieved. That's a, er, load off...

The ally of the Dolls...

In 1954, Gibson unveiled a budget Les Paul model called the Junior. Featuring a slab like single cutaway mahogany body, chunky mahogany neck and a single P90 pickup it was designed for the young and the skint. These days, these guitars are considered classics. The later double cutaway version, launched in 1958, has become a rock icon thanks to New York Dolls guitarist Johnny Thunders.

The 2019 Junior Tribute distils much of the cool late-’50s vibe into a very affordable package. Featuring a single P90 and a slim maple neck, this Tribute is as cool as guitars get for less than a grand.

God save the King of Les Pauls

A couple of years after Gibson launched the first Les Paul - the Goldtop - they followed it up with the Custom. Finished in black, the guitar originally came with single coil pickups and gold hardware. The current Les Paul Custom echoes the spec of the '57 humbucker-loaded model.

The  Custom has the same mahogany/maple carcass of the Standard albeit with binding on the front and rear of the body. The Standard has top binding only. The Custom also offers an ebony fingerboard in place of the Standard's rosewood item.

The latest version comes in Alpine White. The two most famous white LP Customs were owned by Ozzy guitarist Randy Rhoads and Sex Pistol Steve Jones. The new model is £3,799/$4,617. Jonesy would never have paid that. He claimed to have nicked most of his gear.

It's got the looks that kill...

Affordable Les Pauls can often mean you have to compromise. Not here. The Epiphone Les Paul Standard PlusTop Pro comes with a bunch of big boy features and a huge range of finish choices.

Why PlusTop? Take a look for yourself. This sexy beast comes with a beautiful AAA flame maple veneer that gives it the look of a vintage classic. ProBucker pups get you back to the classic rock era with sonic accuracy. The super slim neck makes this one of the easiest to handle Les Pauls we've ever played. All in all, this is an amazing amount of guitar for under £500/$615.

View at Andertons
Check Plugin Boutique
Check Thomann
See all prices (5 found)
Cool looks
Powerful pickups will please the metal crowd
It comes with a case
It's a limited edition...

He might have been with Def Leppard since '92 but Vivian Campbell's new signature Les Paul is named after the Dio album he played on in 1983. Issued by Gibson's subsidiary brand Epiphone, the guitar features high spec touches for a pretty modest price.

Based around the guitar he played on Holy Diver, this Les Paul features a very ‘70s, er, feature. Les Pauls of that era generally came with three-piece maple necks, not the more traditional one-piece mahogany. The maple necks are regarded as more stable. The pickups are high-output Dimarzio X2N numbers. These along with the brass top nut and control knobs give this guitar a unique look.

The ultimate rock guitar. Back in Black... and Heritage Cherry

When the salesman showing you an electric guitar happens to be Angus Young of AC/DC, you know you've picked a winner. The latest edition of the SG is killer simply because Gibson hasn't messed around with what made the original guitar so great.

You get the same beautifully-sculpted body, slim mahogany neck and lush looking rosewood fingerboard. Great sounds, looks and playability are on offer here. And we love the chunky Grover Rotomatic tuners.

The 490 T&R (treble and rhythm) humbuckers pump out classic rock tones from ‘60s mod to contemporary metal. Just add your own idea of the perfect amount of filth. After all, it ain't noise pollution.

The who's who of Who guitars

Check Plugin Boutique
Check Andertons
Check Thomann
See all prices (4 found)
Pete Townshend played one in the ‘60s and ‘70s. End of
We don't have one in our collection. Yet.

This year marks the 50th anniversary of the Woodstock Festival. Our favourite bit was when Pete Townshend of The Who smacked anarchist protester Abbie Hoffman 'round his head with his Gibson SG Special after he stormed the stage.

Townshend made the Special an icon famously using it on The Who's epic 1970 album Live At Leeds. Like Pete's guitar, the latest incarnation of the SG Special comes brandishing a pair of P90 single coil pickups. If you want to know how great a mahogany body sounds when you screw in P90s listen to Live At Leeds. Townshend wrecked a lot of Specials. You damage one of these new beauties and we'll send the boys 'round.

This is basically the Epiphone version of the mighty SG Standard. Built around the classic looks of the original, it features a lightweight mahogany body with those devilish body horns. The Slim Taper D profile neck is supremely comfortable and you get 22 medium jumbo frets on your Pau Ferro fingerboard for smooth playability and string bending.

Loaded with great-sounding Alnico Classic PRO humbuckers, this guitar has one great feature its Gibson brethren doesn't possess. You can split the coils on these pickups to give you humbucking and single coil tones. Not bad for a guitar that costs less than 300 sheets.