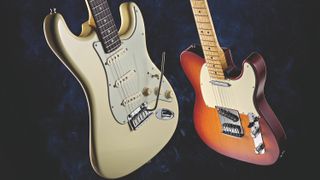 Leo Fender was a genius. Most folk would be content with changing the world with the Telecaster, the first commercially available solid body electric. Yet, lightning struck again in 1954 when Leo unleashed the Stratocaster, arguably the most famous electric guitar of all time. And the prettiest. The Stratocaster vs Telecaster debate has raged on ever since.

But which guitar is the right one for you? Well, allow us to talk you through the differences between these iconic planks. If you think they sound the same, you're wrong. They probably feel the same to play? Try again. Let's try to settle the Strat vs Tele debate. No, not which one is the best. Which one is best for you.

Looking for a great deal on a new guitar? With Black Friday incoming, now is the perfect time to be looking for great Black Friday guitars deals. We'll be sharing the very best offers on MusicRadar throughout the event.

Stratocaster vs Telecaster: The History

Leo Fender and his team in Fullerton, California, began work on the guitar that would become the Telecaster back in 1949. By the following year, a single pickup version called the Esquire was launched. Soon after the two-pup Broadcaster was revealed. After a dispute with Gretsch, Fender rechristened its new guitar the Telecaster in 1952 and it's been in production ever since.

The Stratocaster was born in 1954. Fender's customers loved the Tele but requested some spec tweaks. They wanted an extra pickup, a more comfortably contoured body, and a vibrato unit. Rather than mercilessly tweak the Tele, Leo's team decided to create a new model. The Stratocaster was born and like its older brother has never been out of production.

Stratocaster vs Telecaster: The Players

Often typecast as the go-to guitar for soul and country music, the Telecaster can also rock with the best of them. Cut him and Rolling Stone Keith Richards will always bleed Telecaster. Bruce Springsteen loves them too.

Lest we forget, Jimmy Page employed a '59 Tele for his Stairway To a Heaven solo. For years, we all assumed he'd used a Les Paul.

As for the Stratocaster, it was bespectacled and doomed ‘50s rocker Buddy Holly that initially put the model on the map. Hank Marvin of The Shadows made the Strat an icon of early British rock. Surf dudes like Dick Dale got hip to the Strat in the early ‘60s before Jimi Hendrix sealed its reputation as a blues rock icon by the decade's end. These days we consider Jimi, Texas blues legend Stevie Ray Vaughan and British rock journeyman Jeff Beck as the ultimate ambassadors of the Fender Stratocaster.

Stratocaster vs Telecaster: The Tones

They might have come off the same drawing board but the Tele and Strat have very distinct tonal palettes. Telecasters are sonic chameleons. This is the guitar that links country jazz players like Danny Gatton to classic rocker Pete Townshend of The Who and Slipknot's masks metalhead Jim Root. A Tele can mimic a big-bodied jazz guitar, a country pedal steel, and a Les Paul.

A great Stratocaster will pump out what guitar connoisseurs describe as "glassy" tones. Strat pickups should sound warm and woody with a hint of 'plink', like flicking the rim of a wine glass with your fingernail.

Arguably the most iconic Strat tones are combinations of bridge or neck pickup with the middle pup. Listen to Jimi Hendrix playing Little Wing for a textbook example of the neck/middle pups in cahoots.

While there have been many exceptions over the years, the classic Tele and Strat share a few family traits. The two biggest: bolt-on maple necks and single coil pickups.

Models with translucent finishes will generally have an ash body as it has a prettier grain pattern. Solid colours usually conceal an alder, poplar and basswood carcass.

Up to 1957 all Fenders had a maple fingerboard. Rosewood has been an option ever since, on Japanese and American Fender models. Mexican made Fenders now feature Pau Ferro fingerboards to give the increasingly endangered rosewood a much needed rest.

Oh, and don't assume that you need to buy a Strat just because you need a vibrato. For example, the new Mexico-built Fender Vintera 60s Telecaster comes with a Bigsby vibrato. Better still, it looks seriously cool.

Don't judge a guitar by its price tag. Many Strat and Tele junkies can bore you rigid with tales of those times they picked up a cheap guitar that knocked their socks off.

No sector of the guitar market has improved in terms of build quality and specification more impressively than sub-£/$1,000 entry level to mid-range gear. Take advantage of that and look at affordable stuff like the Squier Classic Vibe and Fender Player and Vintera Series guitars.

A surf-era classic gets an affordable reboot...

The brilliant thing about the Vintera Series, aside from the ace build quality and sensible price tags, are the spec options. You can have this ‘60s inspired Strat in vintage correct (£749/$910) or 'Modified' versions (£849/$1,030).

Those of you looking for cool Strat looks combined with more modern performance will likely prefer the Modified edition. You get a flatter 9.5" radius for easier string bending, hotter output single coil pickups, and a smoother two-point vibrato. It's everything a modern Strat should be.

An artist designed modern classic without the rock star ego

'EOB' stands for Ed O'Brien, the Radiohead guitarist. Unlike the many, many, signature model recipients out there, Ed didn't want his guitar to come across as a vanity project. You won't find his name etched on this guitar.

Aside from a brilliant V shape neck profile, one of the best you'll ever play, the EOB has a Sustainer system. This allows you to play a note or chord and have it sustain, keyboard like, for as long as you like - or at least until the onboard battery runs out. It's an addictive feature on one of the best Strats we've ever reviewed.

The high spec Strat with a low key price tag...

While the new Vintera Series Strats and Teles are the bee's patellas, they still cost the business end of a grand. Like its Tele-shaped brethren, the Player Strat offers killer old school looks and modern playability in a more affordable package.

The list of finish options is impressive but the real gravy is in the super comfortable neck shape and chunky frets. Figure in some fantastic sounding single coils and this thing is irresistible.

For the ultimate comparison, try this and the Tele version. Then you'll know whether you're a Strat fan, Tele nut, or one of those people that loves both of Leo Fender's mechanical wonders.

An affordable retro Strat with some extra firepower

Some people think the Strat bridge pickup is a bit of a weed. If that's you, consider a Strat in a HSS (humbucker/single/single) format. Taking its cue from the groundbreaking guitar tweaking of Edward Van Halen, the immensely affordable Squier Classic Vibe ‘70s Strat features a fat-sounding 'bucker in the bridge position.

Given that it's a ‘70s throwback, this guitar features the big version of the iconic Strat headstock. Playability is enhanced by a modern 9.5" radius fingerboard and some hubby frets.

You can have this guitar with a brighter sounding maple 'board, or one made from the warmer sounding Indian Laurel.

Pining for a Tele? Here's one that won't break the bank…

A Telecaster made from pine might seem like an exercise in cost cutting. In fact, the earliest Fender models were made from the very same timber.

You do get the classic bolt-on maple neck and fingerboard here, not to mention a set of punchy-sounding single coil pickups. The latter feed off the resonance of the body wood to unlock some classic Tele country, rock and blues tones.

The message here is don't be put off by the price. This Telecaster punches above its price tag in looks and sounds. It epitomises that old American cliché. Bang for your buck.

Mirror mirror on the Tele...

Welcome to the hottest Telecaster release this year. We all yakked ourselves senseless over how great the guitar sounds are on the first Led Zeppelin album (1968). Now, thanks to what has become the worst kept secret in rock folklore we all know that Jimmy Page didn't brandish a Les Paul on that record. He used a whole lotta '59 Telecaster.

This new signature model is classic '59 Tele. An ash body, maple neck and a rosewood fingerboard with a comfortable C profile, are all highlights on the spec sheet.

If you want to ultimate rock Tele it's now easy to get on the same page as Jimmy.

The best mid-price Telecaster you can buy

Built in Mexico, the Player Telecaster is a bit like a new Ford Mustang. That is, it shows off its classic DNA while offering modern performance under the hood.

The Player has a supremely welcoming C profile neck with a slippery satin finish to prevent your sticky mitts from dragging. It has 22 frets, one more than your classic Tele, and a modern 9.5" fingerboard radius for choke-free string bending above the 12th fret.

Pickups feature Alnico V magnets. In other words, they work great for purveyors of classic and hard rock. These things have more punch than Rocky Balboa.

A Tele. With extra whammy!

Tele heads have been installing Bigsby vibratos on their guitars since the early 1950s. Even after Leo Fender brought out vibrato-equipped guitar, the Stratocaster, many players still prefer the Tele/Bigsby partnership.

The new slim-necked Vintera Series ‘60s Telecaster comes with a Bigsby direct from the factory. You have to admit the Bigsby looks great in this thing. It's like a hood ornament on a vintage Cadillac.

Tone-wise, you get all the aural sexiness of a classic ash-bodied Tele with the ability to wobble the vibrato to create a shimmer effect or sustain notes and chords.

Tele addict? This long list of the best Telecasters might help
Alongside the Strat and Les Paul, the Telecaster completes electric guitar's unarguable holy trinity. For nearly 70 years this iconic guitar has endured as a touring workhorse and staked its claim in rock history. Here's our list of the very best.