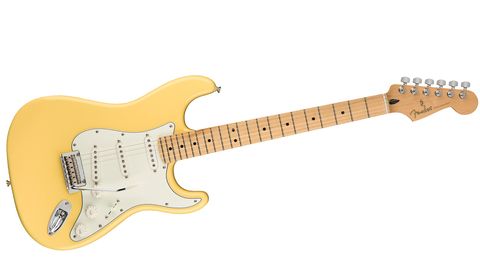 One of the best mid-priced Strats Fender has ever produced.

When it comes to its pride and joy, Fender really goes to town, and the Player Strat is no exception.

Like the Tele, a pau ferro ’board is available for an additional £10, while the 22nd fret comes for free, but there are also HSS, HSH pickup configurations, as well as the flame maple-topped Plus Top and HSS Plus Top, which - appropriately enough - top out the range at £719. All of them pack an updated two-point vibrato design, plus three new Alnico V single coils.

Our traditionally spec’d review model is in the new Buttercream finish - the jury’s out over whether it looks like a more saturated Vintage Blonde or freshly dolloped custard, but we’ve warmed to it. Like the Tele, the satin neck provides a slick playing experience, while there’s little to fault with the build quality other than some slightly jerky tuners.

There’s a hugely usable set of tones across the five-way selector, which recall Fender’s fat Texas Hot single coils and respond beautifully to gain, and treble loss is minimal when rolling back the volume knob. The bridge pickup, which can be weedy on mid-priced Strats, is rich yet cutting - and if it’s still too spiky, the pleasingly responsive tone knob will enable a fairly precise treble cut.

That may not sound like much, but it’s actually a big deal, as the two tone knobs are wired thusly: tone 1 handles neck and middle, while tone 2 adjusts the bridge. It’s an incredibly useful arrangement, and one you won’t find on vintage Strats, which offered no control over the bridge pup. And while the neck single coil is lacking a little presence, it positively shines in combination with the middle for some serious quack attack.

Then there’s that new two-point vibrato, which is one of the smoothest- operating systems we’ve encountered at this price point, with no problems returning to pitch. The familiar ‘loose arm in the socket’ problem still rears its head, but it’s nothing a bit of tape around the thread can’t fix. By their very nature, Strats will always pay homage to the past, but this particular edition packs tones that span the decades and bring the format bang up to date.