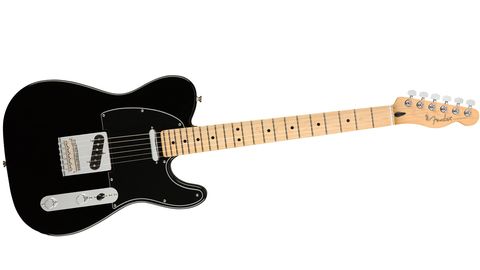 Fender's long-serving workhorse has never been more playable. A no-brainer.

The humble Telecaster remains the guitar world’s most enduring workhorse, and its Mexican-built 2018 incarnation is in rude health.

Key additions this time around include a 22nd fret, all-purpose 241mm (9.5") fretboard radius (which appears across the range), a set of old-school bent-steel saddles and Alnico V Tele single coils. Besides this maple- fingerboarded spec, you can also get a pau ferro ’board for an extra tenner, while the hot-rodded dual-humbucker Tele HH comes in at £579.

The Player Tele instantly wins points for its satin maple-finished neck, which handles like a dream. It makes a welcome change from the over-glossed necks that once populated Fenders in this price range and below, and it’s hard to imagine a guitarist who wouldn’t get on with the comfortable modern C-shaped neck.

The fit and finish is spot-on, and the only gripe we can level is down to personal preference: players who rest their hand on the bridge while picking may wish to swap out those bent-steel saddles for standard blocks, although tonehounds will cite an increased treble snap as a reason for the originals to stay put.

Plug in, and the sonic heft is immediate: the Alnico V magnets employed here lend this Tele some serious punch.

That bridge single coil is one of the most well-rounded Tele bridge pickups we’ve heard at this price point - neither brash nor overloaded in the low-end, it’s perfectly balanced, ideal for Keef-style open G chordal riffage and big, open chords with a touch of drive.

The neck, meanwhile, provides that mellow, jangly texture that Jeff Buckley put to such good use, but give it some gain and it will do big Tom Morello riffs to a tee - after all, the Rage Against The Machine guitarist has employed a 90s-era Mexican Tele for well over a quarter of a century now. The underused middle position is wonderfully glassy, too, and it’s not a world away from a Strat - it will certainly cop a decent Hendrix/SRV solo tone in a pinch.

Of course, the trade-off of using hotter Alnico V magnets means the sounds won’t satisfy the ears of fickle vintage enthusiasts, but that’s not who this guitar is for: anyone after an easy-to-play Tele that delivers a clutch of classic tones and handles gain like a champ won’t be disappointed.