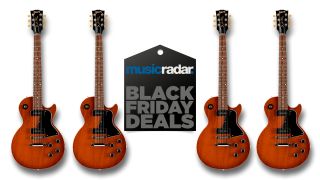 There’s been a huge surge in Black Friday guitar deals over the past few days, and here at MusicRadar we intend to keep you up to date with the best ones. That’s why we’re bringing you news of an amazing offer from Guitar Center.

This limited-edition electric guitar looks and sounds just like the Les Paul Special that reggae legend Bob Marley played during his world-conquering heyday. Built from mahogany with a sleek nitro finish, its rounded 1950s neck profile and rosewood fingerboard give it a stunning retro aesthetic that you won’t be able to get enough of.

And with the guitar fitted with Gibson's premium P-90 single-coil pickups, a set neck and a stable tune-o-matic bridge, you’ll be jammin’ like Marley in no time.

Along with the Fender Stratocaster, the Gibson Les Paul is one of the world’s most iconic and coveted guitars. Seize the opportunity to buy one at an amazing discounted price by visiting today.

Gibson Les Paul Special Honey Burst: now only $899.99!
If you want to take advantage of Guitar Center’s deal and buy one of these legendary guitars for a fraction of the normal price, you’ll have to be quick – the offer ends in just two dayView Deal