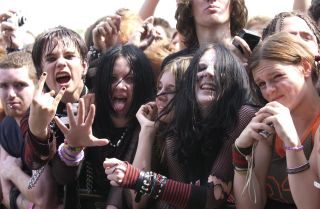 Weekend tickets up for grabs

This summer the cream of the rock world will once again head to Donington Park for the Download festival.

Slipknot, Iron Maiden and Rammstein take top billing this year and the iconic trio are joined by an all-star supporting cast.

Among those confirmed for the festival's main stage are Queens Of The Stone Age, Bullet For My Valentine, Alice In Chains, Mastodon, Motörhead, Korn, Gaslight Anthem and Stone Sour.

There's also plenty to get excited about further down the bill, with the festival's second stage boasting the likes of Limp Bizkit, Jimmy Eat World, Enter Shikari, Airbourne and Karnivool, with many more bands still to be announced over the coming weeks.

The festival takes place between 14 and 16 June, and we have two pairs of tickets to give away.

To enter head here and answer a simple question. Competition closes on 31 May 2013.