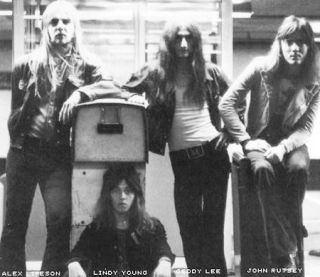 John Rutsey, one of the founding members of the Canadian rock band Rush, died 11 May. He was 55.

Rutsey formed Rush with Geddy Lee and Alex Lifeson in 1968, and played with them until 1974, appearing on the trio debut´s album of that year. He departed soon after, apparently due to a lifelong illness stemming from diabetes. He was replaced by acclaimed drummer Neil Peart, who also went on to become Rush´s main lyricist.

In an obituary in the Toronto Star, Rutsey´s family said his death was caused by "complications from his lifelong affliction with diabetes." Some news reports said Rutsey died from a heart attack in his sleep.

According to Rush's official biography, Rutsey was supposed to write the lyrics for Rush's first album, but grew dissatisfied with his attempts and never completed them. After leaving Rush he quit the drums and became a bodybuilder.

In an official statement, Lee and Lifeson said: "Our memories of the early years of Rush when John was in the band are very fond to us. Those years spent in our teens dreaming of one day doing what we continue to do decades later are special.

"Although our paths diverged many years ago, we smile today, thinking back on those exciting times and remembering John's wonderful sense of humour and impeccable timing. He will be deeply missed by all he touched."