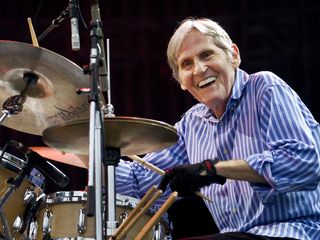 Levon Helm, whose soulful, earthy singing, solid-as-a-rock drumming, and evocative songwriting helped turn The Band into one of rock's most vital and original outfits, died today (19 April) at the age of 71. He had been battling cancer since 1998.

"Levon Helm passed peacefully this afternoon," a statement on his website reads. "He was surrounded by family, friends and band mates and will be remembered by all he touched as a brilliant musician and a beautiful soul."

Born in Elaine, Arkansas on 26 May 1940, Helm began his professional music career playing in Ronnie Hawkins' band in 1957. During his time with Hawkins, he met Robbie Robertson, Rick Danko, Richard Manuel and Garth Hudson. With them, he formed The Hawks, the group that would back up Bob Dylan in the mid-'60s as he transitioned from acoustic folk to rock 'n' roll.

By 1968, Dylan had gone into semi-retirement after a near-fatal motorcycle accident, but The Hawks stayed together and became The Band. All five members were multi-talents, and in Helm they had a true triple-threat: drummer, singer and songwriter. Make that quadruple - he also played mandolin. Some of The Band's most enduring songs featured Helm singing lead, including The Weight, Up On Cripple Creek and The Night They Drove Old Dixie Down.

Rich Pagano, drummer and co-vocalist with The Fab Faux, says that "Helm will be remembered as a great vocalist, but drummers will remember him as an extraordinary player. Everything he played was just right - not complicated, but perfect. Just watch Up On Cripple Creek."

Pagano played with Helm on a number of occasions, most notably at some of the popular Midnight Ramble concerts that Helm staged at his barn-like studio next to his home in Woodstock, NY. "I would play drums on a second kit whenever Levon would play mandolin and sing," says Pagano. "He never told you what to do, but just by watching him, I realized the fundamentals of making playing and singing one."

Following the breakup of The Band in 1976 (documented in Martin Scorsese's film The Last Waltz), Helm continued to play and record. Without Robertson, the members of The Band regrouped in 1983 and resume touring, but the 1986 death of Manuel (he hanged himself after a club show) and the 1999 death of Danko (from a drug-related heart attack) put a definitive end to The Band.

When helm was diagnosed with throat cancer, he underwent radiation treatments which initially robbed him of his ability to sing. Gradually his voice came back, and in recent years he won Grammys for the albums Dirt Farmer, Electric Dirt and Ramble At The Ryman.

"His legacy will be as someone who was true to himself," says Pagano. "In his music and the way he lived, he expressed the essence of an artist."