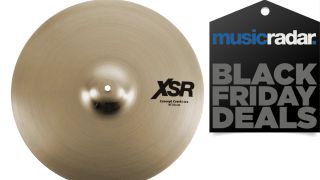 Want a crash cymbal? Not made of money? We've previously described Sabian's XSR series as "professional-level cymbals at a mid-level price." And that was before we saw this deal.

The technology behind their production has been adapted from Sabian's Evolution and X-Plosion series. They're pinpoint lathed and hammered, while their profiles have been enhanced and bells re-shaped to accelerate the overall sound.

Sabian 16" XSR Concept Crash Cymbal - was $149.99, now $79.99
The 16" Concept Crash is a new addition to the XSR series Uniform lathing unlocks a hotter, higher-output glassiness and more of that Sabian B20 character you love.
View Deal