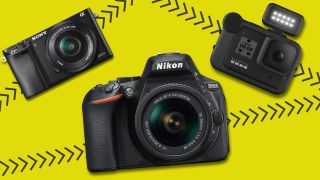 These days, everyone's a filmmaker. With even a basic setup, you can create music videos, film gigs and produce guitar tutorials or vlogs from the comfort of your own home. Or someone else's. As the technology behind the best vlogging cameras improves, the more access you have to features previously reserved for pros. It's an exciting time to be a video maker, particularly if you’re a musician.

It can be daunting, however, to know where to start. Within the camera world there are so many different options. Do you need something you can throw in a bag and tour the world with? Or is your ideal setup a touch more static for your home studio? Whatever your requirements, we’ll get you biting at the heels of popular music vloggers like Steve Terreberry and Jared Dines and racking up the subscribers in no time. Here's our rundown of some of the best cameras for vloggers in the world today.

What is the best vlogging camera for musicians?

We've gone for two different cameras at different ends of the spectrum for our recommendation of the best vlogging camera for musicians. The Canon Powershot G7 X Mark III may look like a standard point-and-click, but hidden within its tiny frame is a tremendous sensor which lets in loads of light. This makes for some pretty special shots, with loads of that creamy background fuzz we all love. Other vlog-friendly features, like connectivity and a titled touchscreen, complete the package.

But it's the Panasonic Lumix GH5 that really steals the show. It's perhaps overkill for beginners or anyone merely dabbling with their first music vlogs, but if making videos is a key part of how you get your music or brand out there, we'd point you towards this one. And, if that's way out of your price range, its little brother, the Lumix G7, is a very capable alternative.

How to buy the best vlogging camera for you

Choosing a vlogging camera can be made a lot simpler when you have a clear idea of what it is you're aiming to do. The bedroom vlogger offering basic tutorials, guitar play-throughs or hot takes on subjects close to their heart will have much simpler requirements than the location vlogger looking to show off the world.

Want to capture your day-to-day musical exploits for the world to enjoy? Something portable like a GoPro action camera or pocket-friendly shooter will do the trick. If you’re looking for higher production values, we’d recommend exploring the world of mirrorless or DSLR cameras.

Likewise, someone positioning themselves as an expert or an authority will need to ensure they are putting their best foot forward visually, whereas others may find a more low-key aesthetic suffices.

That said, there are some key features and specifications which are true across the board. For starters, you'll want to have an idea what the camera is designed for. Some are geared primarily towards still photography but do a great job with video. Others are made purely with video in mind. You'll want to have an understanding of resolution and picture quality too. These days, 4K is becoming the standard. This means smaller pixels, which make for a far more detailed image, however do produce significantly larger file sizes.

Interchangeable lenses are a big deal in the video world. Cameras with this ability offer the chance either to shoot things closer up, further away, or to achieve certain creative effects. We've all seen, and marvelled at, videos which show off arty blurred 'bokeh' backgrounds; largely that is down the the lenses used in conjunction with the sensor. Larger sensors let in more light, giving you more creative flexibility.

Finally, you'll want to consider connectivity (wired or wireless), portability, sensor size/type, stabilisation, compatibility with accessories and, importantly for vloggers, whether or not you can see yourself while you record – for that you’ll need a flip up screen.

Of course, the vlogging cameras in this list will take care of visuals, however none of these are designed to capture the sort of high quality audio you’ll want to include with your videos. For that, we’d recommend investigating a separate audio recording setup to ensure your DJ set, drum cover or ripping guitar solo sounds as amazing as your video looks.

It's also worth exploring essential accessories like lights, a tripod, a case and memory cards.

What are the best vlogging cameras today?

Simply put, this is the best vlogging camera around right now

For many high profile vloggers, the mirrorless Panasonic Lumix GH5 really is the gold standard when it comes to cameras. Its predecessor was the camera that brought 4K video to the masses, and the GH5 took that baton and ran with it.

It's not inexpensive, but for the committed vlogger there are few better. Image stabilisation, interchangeable lenses and a ridiculously high pixel count all combine to deliver the perfect package for any serious videographer.

Sony has great pedigree in the camera world. From its high-end Alpha a9 series models, right down to its more compact models, the Japanese giant knows its way around this market. The Sony A6000 is a great example of its expertise, combining a number of features which make it a solid camera for music vloggers.

Primarily, its small size makes it ideal for beginners who don't need access to tonnes of advanced features. The 24.3-megapixel APS-C sensor delivers superb HD quality footage, while a tiltable rear screen means you can get into different nooks and crannies to get the shots you need.

The go-anywhere action camera for music vloggers with vision

GoPro needs little introduction; we're all familiar with these tiny action cameras by now. Essentially, what you're getting is a well-specced minicam with a slew of interesting functions and features, including gimbal-like image stabilisation (called HyperSmooth), cool slo-mo features and the ability to mount off everything from a guitar headstock to a cymbal stand. The newly-launched GoPro Hero 8 Black action camera is the very best out there.

Vloggers will like the way you can connect your phone to use as an external viewfinder, or you may want to invest in the new GoPro Mods which add lighting, a flip up screen and microphone to the tiny camera. Image quality is better than you'd expect from such a small sensor, and the Hero 8 is also capable of voice control so you don't actually even need to touch it.

Now this is a serious music vlogging tool. The Blackmagic Pocket Cinema Camera 4K is one for the true filmmakers. Its predecessor, while 'only' shooting in standard HD, produced images which knocked the socks off most 4K models, so you can imagine the levels of quality this camera is capable of.

Admittedly, you have to buy into the Blackmagic ethos. So you'll need to factor in lenses, carry cages, microphones and other gear. But believe us, the images you'll get from this wouldn't look out of place in any Hollywood blockbuster. Just make sure you have a computer capable of handling the enormous files it creates...

A killer DSLR from one of the biggest names in photography

As one of the camera world's biggest names, the Nikon D5600 was always going to be a solid choice for this best vlogging cameras list. And, while it's primarily a DSLR (and therefore suited to still images) it also packs in some neat video tricks of its own.

We particularly like the autofocus; the D5600 tracks 39 different focus points so your subjects are sharp even when moving. Expanding its potential with different lenses gives you all sorts of extra creative options too, making this a hugely versatile camera. And yes, the display can tilt back on itself so you can see yourself up front.

A great budget alternative to our number one vlogging camera

Check Plugin Boutique
Check Andertons
Check Thomann
See all prices (3 found)
Superb value
4K for under £500/$610
Decent for stills too
Not much!

If the Lumix GH5 in the number one spot is a step too far price-wise, then the Panasonic Lumix G7 may be just the ticket. Like it's big brother, the G7 packs in full 4K recording capability so your music vlog footage will be pin-sharp.

Panasonic's superb autofocus technology is included too, meaning your shots will be honed in exactly where you want them to be, while Wi-Fi connectivity means your images are ready to review on your smartphone or tablet instantly.

Its smaller sensor means you don't have as much potential when shooting in low-light, or control over your depth of field, but for the majority of people the benefits of this model will far outweigh those compromises.

Now here’s a slightly different proposition. The DJI Osmo Pocket is a rather strange looking beast. Effectively the size of a chocolate bar, but with a small sensor on top, the Osmo Pocket is designed as a handheld gimbal camera. This means it packs in a heap of tech to essentially self-level itself, rendering handheld shots with that buttery smoothness you'd normally associate with steadicam applications. This could come in handy when filming others performing, or documenting backstage antics.

DJI is more famous for its aerial photography drones, but many of the advanced automated tech features, like face tracking, are here in the Osmo Pocket. The small screen is ideal for lining up shots too, although it can be fiddly to control if you have sausage fingers. Don't discount this tiny camera as a toy though; it has plenty of skills that put some of its bigger competitors to shame.

Finally, we couldn't create a best vlogging camera rundown and not include a Canon. And, with a camera as good as the newest version of the Canon Powershot G7, it was easy to find a place on the list.

Packing high-grade spec into a tiny package, the Powershot is a vlogger's dream. It boasts an unusually large sensor for its size, meaning blurry background shots are a breeze, while the wireless connection, image stabilisation and tilt-up touchscreen all add up to a tasty little package indeed.