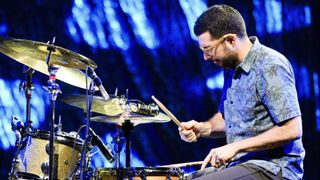 David Bowie thought so highly of Mark Guiliana that he recruited the American sideman and bandleader to track drums on his final album, Blackstar. Here, the highly-regarded jazzer gets behind the kit and answers our key questions.

What was your first drum kit?

“I had a cousin who gifted me her drums because she had been playing and stopped playing. It was a Slingerland kit. I don’t know too many of the details, I should know more of the details! It was a sparkle blue finish. It was the mid ‘90s but these were older drums. It was pretty standard, I think it was 12” tom and 16” floor tom. They gave me hardware with the kit but no cymbals so I cut discs out of cardboard boxes and put those on the stands. Each birthday or Christmas from there I would add a new cymbal to the collection. Before not too long I had a complete kit.”

“I’d say Chad Smith. I started playing drums in 1995 so I was into what was on MTV around that time. That was the time when I started to make decisions over what records I wanted to buy so Nirvana and Dave Grohl was another. Matt Cameron with Soundgarden was another. I was into guys like that and they were the first influences for me.”

“The sarcastic answer I could give this would be nothing, in the sense that I really enjoy the challenge of sitting down at a new instrument, a new-to-me kit and then trying to make my own statement in a new or uncomfortable environment. That helps to keep me on my toes and keep me in the moment, present and truly trying to make decisions that are appropriate for that moment on that specific instrument.

“But, if I had to choose one thing there is this cymbal that I love. It’s a 23” Sabian cymbal and it is essentially a prototype. I was up at the Sabian factory a few years ago and this cymbal was sat there unlabelled and dusty and I kept walking past it and playing it.

"I was magnetised to it and I ended up taking it home. It has since become my favourite cymbal. It has stick definition but also this beautiful warm crash and the two have a very nice relationship. That’s a cymbal that I have with me most of the time.”

What’s the biggest onstage nightmare you’ve ever had?

“This might sound a little ignorant, but for me what can really go wrong on stage? Nothing can go wrong. Maybe I can say that because I’m often involved in creative environments where things going wrong leads to new, exciting musical choices. If you’re playing to tracks in an arena then things can go wrong but I don’t have personal experience in that world.

“There is one thing though which is being very ill and having food poisoning, I’ve had that happen a couple of times. I played with the bass player Avishai Cohen for many years and we were playing in Israel and I was very ill. I got through the gig but right after the last song I had to dismiss myself and head to the bathroom. The audience wanted an encore and I just couldn’t do it but luckily there was a percussionist in the band who could play drums very well so he took over on drums and I could hear the encore as I was trying to take care of myself backstage.”

Who would you most like to take a drum lesson from?

"Someone like Aphex Twin, Richard D James, as far as I know he doesn’t play drums but the way that he thinks about drums and the way that he programs those rhythms is completely mind blowing to me and inspiring. I would love to pick his brain.”

“I’d like to say consistency and reliability. My goal is to be at my best every time that I am playing music. I try to live in a way to put myself in the best position that I can to play my best. Specifically when you’re on the road, there are many elements that take you out of being your best. That might be waking up early and then taking a flight and there’s traffic, bad weather, there’s all of these different ways of being tired or underfed or whatever.

"I’m always trying to take care of myself and put myself in that best position and therefore trying to be in the moment and give the music everything that I have every single time. That’s what attracts me to the other musicians that I choose to play with as well, specifically in my band where I get to hire the musicians.

"Consistency is one of the first qualities that I look for, and it’s not even the consistent of ‘playing well’, it’s the consistency of emotional output and the commitment to the music and to each other. I try to lead by example on that.

“I was in Cuba recently, I was in Havana and man did I feel like a child [laughs]. Being around some of those musicians and that music…forget the drummers, of course they are incredible, but just the people, that music is what they know, what they grew up with and what they’re surrounded with by the fluidity and ease with which they dance to that music and feel that music is something foreign to me. It showed me that I have plenty of homework still to do and I am inspired to do so.”

“I’m not sure of exactly which song it was, but I do remember early on Green Day were huge right around the time I started playing, I guess they still are huge. I was trying to learn a few of their songs, so it might have been something by Green Day as well as some songs from Nirvana’s Unplugged album.

"Dave Grohl was playing very quietly and with hotrods on a few of the tunes on that record. That felt like something I could try to wrap my head around at that time.”

“To try and just keep it fun. For me, my most fulfilling musical situations have been rooted in fun. The times that I have pursued a path for other motives, whether it be peer pressure of thinking I should be involved in a certain thing, or maybe financial and thinking too much about what something pays, those gigs have sometimes not been the right choices for me. But when a decision has been rooted in fun and based on how it would fulfil me, that is the way that I try to make my decisions.”