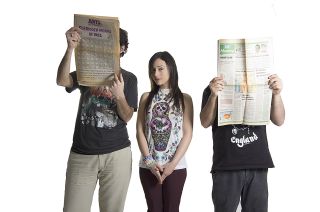 ACOUSTIC EXPO 2014: You may not have heard of Driving Mrs. Satan (yet), but you almost certainly know the tunes they masterfully cover... Although we bet you haven't heard them sounding quite like this before! The trio's debut album, Popscotch, is a collection of old metal classics reimagined in subtle and unexpected ways, performed with ethereal female vocals courtesy of Claudia Sorvillo, throbbing double bass from Giacomo Pedicini, and intricate acoustic guitars at the hands of Ernesto Nobili.

From AC/DC stomper Hells Bells to Iron Maiden's metal classic 2 Minutes To Midnight, and with some essential Anthrax, Helloween and Judas Priest thrown into the mix too, London/Naples based Driving Mrs. Satan pay their respects to the horn-raising originals whilst making their haunting new versions a spine-tingling listen. Here they tell us exactly how they did it...

How did the three of you meet and what inspired you to start reworking heavy metal classics in such a distinctly different way?

Claudia Sorvillo: "Giacomo and Ernesto met many years ago. They both decided very early [on] to be musicians and have been playing together for years. I met Ernesto in 2007, he was recording acoustic guitars with another music project. It was Giacomo's idea to play heavy metal classics this way. He was really in love with all the songs that are in Popscotch but never had the chance to play them. I liked the idea and gave it a try. It was good fun."

Giacomo Pedicini: "The idea came to me while travelling. I had been wanting to do something around heavy metal for a while. I felt I had a moral debt with this genre. After many years of music, experiences and listenings I decided that it was time for me to go back to that music that made me wanna be a musician and pay a tribute to it playing it the way I enjoy the most."

Your website tagline is 'heavy metal made easier', but what challenges are there in converting a song usually associated with aggression and power to an acoustic setting?

Giacomo: "The core challenge is to keep the melodic sense of the vocal line, while allowing some small changes so that the listener can follow the melody as he knows it. For the instrumentals I found it particularly interesting hiding or highlighting some small melodic elements of the original tracks."

Claudia: "As a singer I wouldn't say there are many challenges. The songs may sound different but we kept as much of the melody as we could. They stay powerful and expressive, no matter how you rearrange them."

Which songs in particular proved the biggest challenge to rework and which lent themselves best to the unplugged approach?

Giacomo: "They were all suitable to be rearranged in an acoustic way. I Want Out [Helloween] was the first song I worked on, and came out very easily. Sure the work on Caught In A Mosh [Anthrax] took longer. That song has a more complex arrangement and it's told as a tale. I am very proud of it. One time after a gig a guy came to us and said, 'And to think that I used to smash my face with this song!'"

Claudia, these songs sound ethereal with your beautiful voice but on the original recordings the vocals are aggressive! How do you know which songs will work for your vocal range?

Claudia: "Most songs work for any vocal range if one's allowed to change the key and the melody just a little bit. We rehearsed and recorded many, many songs before deciding which were going to be included on Popscotch. If we had the budget, we could have easily recorded a six-hour album."

So where do you start when giving these songs the acoustic treatment?

Giacomo: "First of all I listen to the lyrics - they are very important. In the lyrics there's a lot of information about the work to do. I read them and I sing the melody very slowly. Then I focus on the atmosphere of the original song, often sitting at the piano and playing the melody again and again until a little hint gives me the idea to follow for the arrangement. Then Claudia interprets the song her way and the arrangement work starts. Most of the songs are part of my musical DNA. I know structures and melodies by heart and they match a very precise mood."

Ernesto, riffs from tracks like Hell's Bells and 2 Minutes To Midnight are so iconic. Are you conscious of remaining respectful to those original guitar parts in your reworkings?

Ernesto Nobili: "Of course I am. Especially 2 Minutes To Midnight's riff. It's impossible to think of this track without the riff at the beginning. Obviously at the same time I tried to arrange and play the riffs in order to respect the musical sense Driving Mrs. Satan was working on."

Do you know if any members of the bands you cover have heard your versions? If so, what feedback have you had?

Giacomo: "Yes, we had some good feedback by some. As soon as we finished recording I Want Out, for example, we sent the recording to Michael Weikath from Helloween and he enjoyed it."

Which other iconic metal bands would you like to cover in the future and why?

Giacomo: "During our live shows we play songs by Venom, Voivod, Judas Priest, and Queensryche. There are many others. In the future I'd like to dig into underground metal, among those bands who didn't have a big success but made exceptional records."

Finally, if you could pick three tracks from Popscotch to best represent what you're doing, what tracks would you choose?

Giacomo: "It's always difficult to say, but I think I Want Out, Caught In A Mosh and Hells Bells are the tracks which represent us the best."