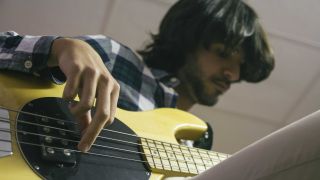 BASS WEEK: We bassists are, perhaps, the least noticed of the traditional four-piece band line-up.

Singers and guitarists monopolise the attention up front, and drummers are either the butt of all the jokes or the object of an awful lot of sneaking admiration. But bass players? We simply do our job, stoically getting down with our bad selves while everyone around loses their minds.

And we’re fine with that. Why? Because the bassist’s life is one filled with low-end wonder, friends. In support of our claim, here are just a few of the best things about being a bass player...

There is nothing sweeter in a bass player’s life than sitting in the pocket and getting your groove on. For when it comes down to it, we are all worshippers are the temple of groove. Funky monks, if you will.

And it’s an elusive beast, the groove. It surrounds us and penetrates us; it binds all bands together - but not just any old Tom, Dick or Harry can find it. You have to feel it in your bones, and channel it out through your instrument.

The bass isn’t about surface. It’s not about the lyrics or the melody or the flashy solo. It’s about that thing deep down in the song that makes people want to move. It’s about the groove, brothers and sisters. Hot damn.

People want things from lead singers. Things like crowd interaction, and banter, and eyeball-melting charisma. Guitarists suffer from this expectation, too, except they must somehow be all sexy and edgy whilst simultaneously busting out a solo and tap-dancing over a dozen pedals. But bass players? We’ve got it as easy as we like.

Sure, you can be the frontman if you like (hello, Phil Lynott), the co-frontman (Macca, naturally), or the much vaunted ‘third frontman’ (a la Paul Simonon of The Clash), but you can just as easily stand off to one side stock still, playing your parts and kicking back. All the glory of being in a band, but none of the pressure - result!

Ask anyone to name their favourite song of the moment. Listen to said song. Notice anything? Of course you do. The bass is insanely brilliant. It always is. Know why? Not every great bassline has a great song, but every great song has a banging bassline. It’s a stone-cold fact.

Popular music, the 20th century’s greatest invention, would simply not exist without the electric bass. It would have no heart, no groove, no balls. In a thousand years, when the Pop Historians dig up the song-mammoths of our long lost epoch, they will agree on this: nothing makes a song kick ass like a great bassline.

Much like our six-stringed cousins, bassists have a wealth of shapes and styles to choose from when selecting a weapon of bass destruction. However, unique to the bass is the sheer level of engineering that goes into building our instruments.

They’re bigger, heavier, replete with strings that could be used for deep ocean cabling and hardware forged by orcs in the fires of Mount Doom. From the clean lines of a Fender Precision, to the axe-like Gibson Thunderbird or the beautiful brutality of a Rickenbacker 4001, you’re never far away from a larger-than-life beast of a thing when you’re shopping in the bass section. And that’s very much how we like it.

5. You are, obviously, the coolest

Look, it takes a certain type of confidence to be a bass player, right? The mysteries of the low-end are not for those lacking in self-esteem, or for preening peacocks who thrive on attention. No. Ours is not a world of histrionics or flashy solos.

To be a bass player is to quietly, cooly do your job, sometimes without praise, safe in the knowledge that without you, there is no roll in the rock, no rhythm in the blues. To play the bass is to believe that you and you alone can bring the funk should it be summoned. It is a heavy burden, and one that can only be borne by the very chillest of the chill.

Real talk: nobody notices an average bass player. Barely anyone notices a bad bass player, unless they go out of their way to draw attention to themselves (perhaps with a sign of some sort).

This means, effectively, that people with barely a bone in their body can, in the right circumstances, have a long and fruitful career banging out one-note basslines in front of adoring crowds. Good luck to them, we say. On the flip, if you’re that rarest of beasts, a bass virtuoso, you’ll find yourself in higher demand than almost any other musician.

In the life of a musician, sensation is everything. The hair-raising riff, the grin-inducing round of applause, the mountain lake refreshment of the post-show beer - they’re the perks of the job. And for bass players, there is no better feeling than plugging in, turning up, and hitting that first note.

It doesn’t matter if you’re in a rehearsal room or at soundcheck, that note that shakes the walls and rattles the bones of everyone within its blast radius is the sweetest sensation of them all. You are master of the low-end, and all shall bow before your all-conquering bass mastery.

What is a drummer without a bass player? A headache, that’s what. Guitarists sound thin and widdly pretty damn quick without us. Singers are groove-less without the bass doing its thing behind them, and keyboard players might as well just pack up and go home.

For the bass is the tie that binds, the grit in the oyster that makes the pearl. Take away the bass and there is no rock and roll, no funk, no jazz. Without us, bands are simply loose collections of musicians wondering why they sound so puny. With us, rock mountains can be moved.

Once upon a time, we were expected to lug around double-basses. As a result, most bass players had the upper body strength of eastern European olympians and the temperament to match. Leo Fender changed all that, and what followed was a bloom of creativity that is still going on.

Modern musical history is littered with bass virtuosos that have revolutionised what the bass can do, and modern-day Leos keep pushing the technology into newer, ever more rumble-some directions. To play the bass is to step into the shoes of pioneers.

25 best basslines of all time

There is a very real and noticeable difference between guitar amps and bass amps. Guitarists often plug into delicate little things that need careful maintenance and must be handled like newborns. Bass players tend to prefer amps that look like they were made to survive nuclear bombardment.

We like 'em loud, large, and powerful enough to rock the very foundations of any given venue. Cabs covered with industrial grills, amp heads that appear to have been constructed in soviet-era Russia, rigs that need a team of six burly roadies to move them three inches - this is the stuff of bass heaven.

There are endless different approaches to playing the bass, and they all work. Only fancy playing one note a bar? Go right ahead. In the mood for a slap-a-thon? Treat yo’ self, my fleet-fingered friend.

One of the greatest things about playing the bass is the musical freedom that comes with it. When pushed, most non-bassists won’t have the vaguest clue about what the bass is for, which gives you carte blanche to do whatever the hell you like. So run free, explore your musicality, and if it all goes wrong, blame the drummer.