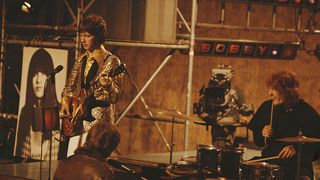 The Les Paul has long been an iconic instrument in its own right - and the subject of more myth-making and subsequent dissection than perhaps any other guitar. Nonetheless, it’s clear that when one is placed in the hands of the right players and producers, tonal magic can happen. Here, we attempt to draw up a selection of the best Les Paul tones captured on record...

A watershed moment for blues- rock, Clapton’s playing on his first post-Yardbirds record (aka the ‘Beano album’) is a landmark for tone, too. The guitarist bought what’s generally believed to be a 1960 Les Paul Standard from a shop in London; later stolen during his early Cream days. Clapton’s quest for sustain also led him to a Series II 1962 Marshall JTM 45 ‘Bluesbreaker’ combo, rolling back the guitar’s volume to effectively control the overdrive on this stunning version of the Freddie King classic.

The Les Paul Standard has remained in production since the mid-1970s and has also undergone numerous reinventions over the years - some in the name of authenticity, others all because of innovation. In late 2004, Gibson announced that the 2015 Standard would now be featuring G Force automatic tuning, a zero-fret adjustable nut and wider fingerboard dimensions, to name but a few of the sweeping changes that would go on to set the internet forums alight...

Jones’ recollection is that the Sex Pistols’ classic punk record was recorded through a Fender Twin with Gauss speakers (allegedly stolen from Bob Marley’s band) that enhanced mids over the trebles, with two Les Pauls; a black 1954 Les Paul Custom and his more famous white 1974 model.

Kossoff’s classic tone was fuelled by his love of 1950s and early 60s Gibson ’Bursts, with high action and heavy strings. But the riff and solo on Free’s best-known song may not have been played through his usual Marshall; in fact, it’s rumoured that Kossoff actually used a 50-watt Selmer Treble ’N’ Bass amp on the track instead.

Page recorded Zeppelin’s debut with a Telecaster, but for the follow-up, he’d bought Joe Walsh’s ’59 ’Burst. The metallic descending riff tone here is the result of distant mic’ing of a Marshall Plexi from Page to fatten the sound of a cranked amp, while a depressed wah is used on the solo for that raucous tone.

6. Gary Moore | Thin Lizzy - Still In Love With You

The second appearance in this list for Greeny, after Peter Green sold it to young protégée Moore. This classy Lynott slow blues saw him run it through an original UniVibe and 100-watt H&H amplifier singing sweetly, the neck pickup just pushing the amp’s front end into natural overdrive. Simple and fabulous!

7. George Harrison | The Beatles - Something

George ended up re-recording his finest break on his greatest song, just to change the tone. He replaced his earlier solo using ‘Lucy’, a Goldtop refinished in Cherry and previously owned by friend Clapton, and then John Sebastian and Rick Derringer before him. Harrison played the famous solo through an unspecified Fender amp.

Butler was inspired by hearing Nirvana’s Smells Like Teen Spirit to write Suede’s enduring, guitar-riff-led anthem, but the marriage on this song is a surprisingly jangly overdrive tone for a Les Paul, but layering with a Rickenbacker 12-string and an ES-355 through the amp choice of a Vox AC30 with a flanger certainly aided that.

Scholz has always been loyal to his two ’68 Goldtops with the P-90s swapped for humbuckers, but his perfectionist approach to technology and wall of sound on Boston’s debut was forward thinking. He used a cranked V Marshall Plexi 1 head fed into a prototype of his own design Power Soak attenuator and stacked layering.

10. Keith Richards | The Rolling Stones - (I Can’t Get No) Satisfaction

After buying it at London’s Selmer’s music store in 1964, Richards wasn’t sure about putting his Bigbsy-fitted LP through a Gibson Maestro Fuzz-Tone pedal for the opening riff of the final Satisfaction recording, and wanted horns. But his bandmates convinced him and the sound became a milestone in early fuzz use.

The magazine for serious players
Subscribe and save today!
More Info