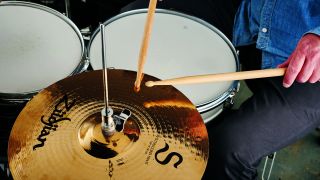 So, you've got the hang of some basic, versatile beats. Now it's time to focus on applying some of the groove embellishments that can add life and variety to your performance.

That's why, in our next level groove series, we're lifting the lid on some of the concepts that you may have heard in the playing of your favourite drummers and offering some ways for you to take your own playing to the next level.

Drummers often incorporate subtle hi-hat inflections within the basic grooves but without detracting from the feel or pattern. Here are some widely-used ideas that you can apply today.

1. The sticking and triplet rhythm sdd a subtle embellishment

This first example sounds like a 4-stroke ruff in isolation but the difference in this, and all of the examples, lies in the sticking. In this case we’re playing RRLR and with a triplet rhythm applied to the first three notes. And when played on the hi-hats, with the final right hand note falling on the downbeat, the effect is a subtle flutter within the groove.

2.  Here, a simple five-stroke roll played as 32nd notes adds excitement at the end of the bar

Next, we move into the realm of double-stroke rolls with Example 2 featuring a 5-stroke roll. Developing a consistent and cleanly articulated double-stroke roll can take time and practise but playing them in short bursts on the hi-hats is much easier given the duration and the responsiveness of the surface.

3. Next, we apply the same idea, but use seven strokes played as doubles

We extend the roll by one more double-stroke in Example 3, so we’re now playing a 7-stroke roll on beat 4.

4. Finally, the seven-stroke roll is applied at the start of the bar

In Example 4 we move the 7-stroke roll to the beginning of the bar so that it now ends on the backbeat on beat 2.