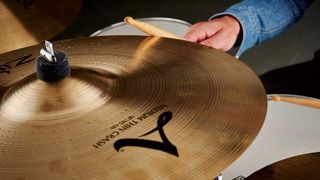 After getting to grips with some essential grooves it can be time to focus on developing some of the embellishments and variations heard in the playing of more experienced drummers.

So in our next level groove series, we're lifting the lid on some of the concepts that you may have heard in the playing of your favourite drummers and offering some ways for you to take your own grooves to the next level.

Crashes are frequently played on the first beat of the bar, however, there can be exceptions, where the crash is played earlier giving an anticipated or ‘pushed’ effect.

Here we look at maintaining steady time whilst incorporating these different crash options.

The most frequently encountered anticipated crash is the ‘&’ of beat 4. In this two-bar example the crash is set up with a simple open hi-hat on the upbeat eighth note of beat 3.

2. 'Feeling' in sixteenth notes will help place this crash correctly

A more syncopated anticipated crash is the last 16th-note of the bar. In order to execute this accurately it’s important to be feeling the 16th-note rate whilst playing the preceding time.

3. The crash is moved to the sixteenth note straight after beat four

Example 3 features another 16th-note based anticipation, this time falling straight after beat 4 on the second 16th-note.

4. Maintaining the groove while playing multiple crashes is important

Occasionally, we may be required to play several crashes and it can sometimes be effective to maintain the groove whilst doing so. Example 4 shows a typical example of this, where the backbeat on beat 4 is played in between the syncopated crashes.