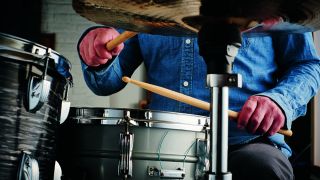 After getting to grips with some essential grooves it can be time to focus on developing some of the embellishments and variations heard in the playing of more experienced drummers.

So in our next level groove series, we're lifting the lid on some of the concepts that you may have heard in the playing of your favourite drummers and offering some ways for you to take your own grooves to the next level.

Note that the ‘+’ and ‘-’ signs denote exactly where the left foot will open and close the hi-hats respectively. And with short durations such as these it can be easier to play the left foot ‘heel up’.

1. ‘Bark’ the hi-hat on the fourth sixteenth note of beat two

Example 1 features an open hi-hat note on the fourth 16th-note of beat 2. This means it will be played in the left hand, while the left foot will step the downbeat of beat 3.

2. This time we add two barks to the hi-hat pattern

3. Here, our second bark lasts for an eighth note

Example 3 introduces the challenge of playing open hi-hats of two different durations with our familiar 16th-note on the last 16th-note of beat 2 and an eighth note on the ‘&’ of beat 3.

4. The bark is moved in front of the first backbeat

A new ingredient is added in Example 4 in the shape of an open hi-hat before the first backbeat. Once again, because it falls on an upbeat 16th-note this will fall in the left hand.