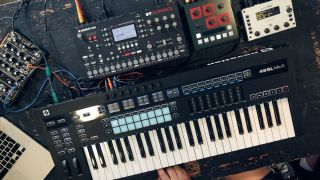 As we noted in our review, the Novation SL MKIII's ability to sequence and control analogue hardware, MIDI-equipped instruments, plugins and your DAW all from one interface and clock source is excellent.

Here, we're going take you through the steps required by Logic Pro users if they want to control their hardware using the SL MKIII.

Step 1: In Logic, for example, there’s an External Instrument plugin found in Instruments » Logic » Utility » External Instrument. With a Korg Prophecy synth hooked up to inputs 1 and 2 of our audio interface, we select these as the inputs in the plugin window.

Step 2: Set Novation SL MkIII To DIN 1 as the MIDI Destination, then connect the SL MkIII’s MIDI Out port to your hardware synth’s MIDI In port using a standard 5-pin DIN MIDI cable. Set your synth to receive MIDI on just one channel. If you’re only using one synth, Channel 1 will be fine.

Step 3: Press Shift » Sessions on the SL to get to the Templates page, and check that the DIN setting has been enabled and set to 1. With this switched on, the MIDI note data transmitted when you play the SL’s keyboard will be sent out of the 5-pin DIN port that’s connected to the hardware synthesiser.

Step 4: Now, when you play the SL MkIII’s keyboard, you’ll be triggering the synth. Record a MIDI part into your DAW. If you want to use the SL’s transport controls to do this, hit the InControl button, followed by the Record button. This will activate your DAW’s Record mode.

Step 5: Hit Stop when done recording. You can now use your DAW’s MIDI editing tools to quantise and edit your part if desired, just as you would with any softsynth. But there’s a snag: when we create a new software instrument track to record in, say, an accompanying kick drum part, we’re still triggering the Prophecy along with the kick.

Step 6: We get around this by opening the Templates page on the SL once more, then turning off the DIN setting. This prevents MIDI data being transmitted from the MIDI Out port. It’s still going down the USB cable to the DAW, though, so we can trigger the kick drum. Now, when we play the SL, all we’re triggering is the kick.