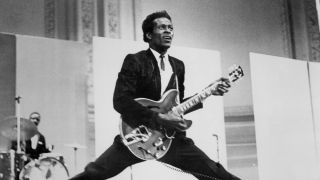 Guitar skills: If there’s a more influential guitarist out there, we're not sure who it is… Of course, the concept of players copying solos and licks is not unusual, but when you consider how many modern players still quote Chuck Berry licks pretty much note for note, that’s something unique. Check out almost any solo by Steve Jones or Angus Young to start with, plus you won’t have to look long for lots more. Of course, Chuck wasn’t just a soloist, he was a writer too, inspiring The Beatles, The Rolling Stones and even The Beach Boys.

At first using a bigger-bodied Gibson semi (an ES-350T) on the classic recordings for the Chess label, Chuck changed to an ES-355 soon after they were introduced in the late 1950s. Both the social commentary of the lyrics and his aggressive guitar style – often introducing songs with a melodic ‘hook’ – caught the attention of players and public alike.

Though Chuck’s approach and style are essential viewing, this article is concerned with demonstrating how many of Chuck’s ideas went on to become the bedrock of blues and rock (and punk, and so on), rather than being a ‘play-in-the-style-of’ feature…

Having had a good listen to a few originals and some more recent Berry-inspired material by the Sex Pistols, The Who and AC/DC among others, I’ve gone for an improvised solo that I hope captures a few of Chuck’s key stylistic elements – and allowed myself the indulgence of adding a few modern touches: more drive, more string bends, some quicker phrasing, and so on. It’s all clearly traceable back to one man in the end, just as Chuck’s style is clearly based on the blues.

Everyone needs a bit of Chuck Berry in their playing – here's how you can add some.

It’s clear what inspired this lick! I’ve added some drive and a modern twist with some selective palm muting to keep things defined in the last two bars. Chuck would have used fairly heavy flatwound strings originally, and this was arguably a key factor in the development of his early style. The slides and hammer-ons from minor to major (rather than any string bends) are a homage to that.

Though this idea isn’t lifted from any particular solo, it demonstrates how modern blues and rock players take similar pentatonic note groupings, though this is expanded to include the distinctive 6th – in this case, F#. With a cleaner tone, this would benefit from alternate picking, giving more of a Heartbreaker-era Jimmy Page effect, but I went for this smoother-sounding approach in the heat of the moment.

Again, we’re looking at how players took the style of what Chuck invented and seeing where they went with it. This grouping of notes takes from his rhythmic approach to phrasing, which is as important as note choice. Sometimes it’s interesting to choose a small group of notes and explore the possibilities. This can facilitate melodic and rhythmic development – and makes the ‘duck-walk’ easier to perform…

In the same spirit as Ex3, this short example keeps to a more regular rhythmic pulse, but makes use of neighbouring major and minor 3rds (Cn and C# in this case). We’re so used to hearing licks like this now, but it’s interesting to examine this and the chromatic descent at the beginning of bar 2 with fresh eyes. Check out Steve Stevens’ playing on Billy Idol’s version of Mony Mony for an interesting take on this.