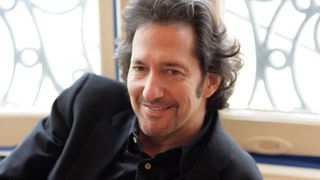 I first learned about the double diminished scale in the 1970s, inspired by pianists like Chick Corea and Herbie Hancock. At that time, I was studying a book by Nicolas Slonimsky called Thesaurus of Scales and Melodic Patterns.

It displayed countless chords alongside scales that corresponded to them and connected dominant seventh chords with the double diminished scale. From there I started introducing my ears to its singular sound. Here’s an introduction to this alluring scale, along with some ways to put it into action. For an example of this scale used to great effect, check out saxophonist Cannonball Adderley’s seminal album Somethin’ Else—specifically the unforgettable version of the standard “Autumn Leaves” featuring Miles Davis.

Ex. 1a illustrates the idea of this scale, with a root of F. It’s derived from two diminished seventh chords a half-step away from each other: Fdim7 and F#dim7, shown in Ex. 1b.

Start on a different root, and you’ll find yourself walking through one of those series, just in a different order.

Try playing each chord along with its corresponding scale to start incorporating these sonorities into your musical vocabulary.

Improvising with arpeggios is another great way to apply the sound and feel of the double diminished scale.

Ex. 3a illustrates an arpeggiated pattern built using major triads from (again) those four corresponding chords. Minor triads also work well when arpeggiated in this fashion, as in Ex. 3b.

Another way to imbue your playing with this potent sound is by arpeggiating the two diminished seventh chords that make up each double diminished scale, as in Ex. 3c.

Jazz pianist, composer, and bandleader Michael Wolff has anchored the bands of Cannonball Adderley, Sonny Rollins, and Nancy Wilson, and was also the musical director for The Arsenio Hall Show. Find out more at michaelwolff.com.