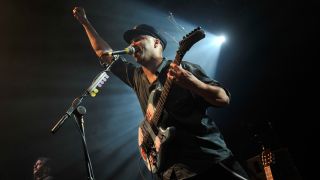 30-day guitar challenge: Getting into the groove is an integral part of guitar playing, and that's our focus for day 6 of the challenge.

Work on strumming different subdivisions and feels, and expand your rhythmic potential by adding syncopation to your playing.

Sixteenth notes are twice as fast as eighth notes. Even though this example is exactly the same tempo as the previous one, there are twice the amount of ‘note events’.

Twice the speed of 16th notes are 32nd notes, however, playing 32 notes per bar can be a little too much. It is more common to add occasional 32nd notes within a 16th-note rhythm, like you can find here with this Tom Morello-inspired scratching riff.

The 32nd notes are always grouped in pairs and followed by a 16th note so that you can play them with a quick ‘down up down’. Keeping your wrist loose and the pick attack light is essential when playing this.

This bluesy riff is played with a shuffle feel. Rather than the eighth notes being straight the downbeats should be twice as long as the upbeats. See this as triplets taking out the middle note leaving just the first and third notes.