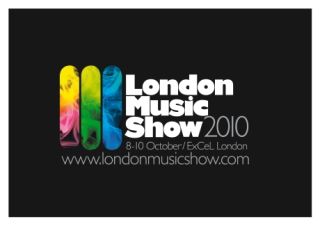 Tickets for the London Music Show are now on sale here.

The show promises a great deal for guitarists as well as drummer and recording enthusiasts with threee days packed with exhibitors, artists and opportunities to improve your playing.

There's also an incredible Fender competition - the company is giving away a guitar every hour for the duration of the show!

Guitarist is very proud to announce that Joe Bonamassa will be offering 150 guitarists the chance to learn from him first hand on the Friday (October 8) of the show.

Space on his very special blues masterclass is strictly limited to 150 places at £30 each and the masterclass session will be followed by a signing session for ticket holders. Tickets on sale soon.

In addition British acoustic star Newton Faulkner has also been confirmed for the show's Guitar Zone. He'll give a lesson in percussive playing aimed at all levels of player and also appear on the Live Hall stage to perform.

The Guitar Zone at the LMS will be for players, by players because it's run by Guitarist alongside our sister magazines Total Guitar and Guitar Techniques.

In the zone you'll also have the opportunity to try out the latest gear. Up to 30 people will be able to plug in and play through headphones simultaneously to join in classes aimed at players of all levels.

For all the latest updates on the London Music Show visit www.londonmusicshow.com